An Administrative and Accounting Assistant that holds an important function in CCEF as she is in charge of processing of cash advances, reimbursement, government remittances, and other duties as needed. From being a volunteer since 1998 to an official staff of CCEF since 2005. “While I’m still alive and my health condition is in good term and so I am willing to work in CCEF on the coming more years,” she said. Feel so content and happy with her job as she was not just working but also she helps the environment by being part of CCEF which is into conserving coast. She was so thankful that she became this professional about environment and also applies her environmental protection passion in everywhere that she went, even taught her child and young ones on how to conserve our environment by doing minor actions that would eventually create major impacts to our environment. Ultimately, CCEF plays a crucial role in helping people to live more sustainable lifestyles. 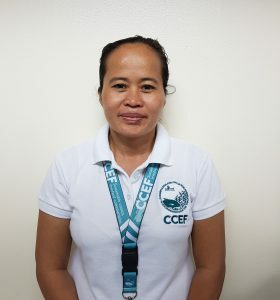 An Office and Field Assistant, one of the highly dedicated and hardworking staff of CCEF is now at her 14 years working as a part of organization. Started at the age 29 and now she’s 44 but still foresee herself working at CCEF years from now. “If you’re so satisfied with your work, you would be committed,”she said. Though she was undergraduate yet CCEF mold her to be the best that she could be and gave her the chance to showcase her skills and knowledge that basically developed herself. Learn the environmental knowledge from sustaining and conservation of coast that would really involve communities and improvement in quality of life to take up causes related to the environment such as waste management, biodiversity, conservation, environmental degradation, protecting mangroves and coral reefs and more. “I have come this long way because of CCEF and I thank God for that,” she added. 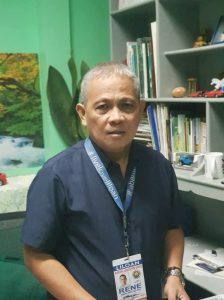 He is the Municipal Agriculturist in the municipality of Liloan. He and his colleagues find solutions to the problems of the marine life. The municipality of Liloan has connections with several of people and organizations to help them with the job they have. With the support from different organizations such as UP, MENRO, and CCEF, they were able to act on those problems appropriately. He still continues to push more of the Information, Education and Communication (IEC) Campaign to take place in order to educate the younger generation about lessons like conservation and protecting mangroves. He does his best to protect the environment and is still going strong for their municipality.

A former board member of CCEF. He is a steward of environment specifically for the marine life. He started doing his work on the coasts of the Philippines before CCEF was founded. One of his expeditions took him to Batangas to dive into its ocean. There he was assessing the health of the marine life through the funds of the other volunteers in Sulu Fund for Marine Conservation. After being a board member of CCEF, Dr. Salamanca went overseas to study and work there. He was able to learn and to help the communities while being there. He is still continuing to do more work for the betterment of the environment. 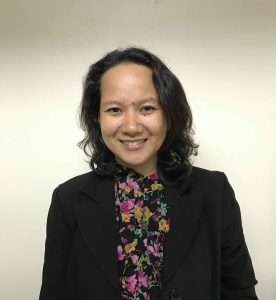 She is the Coastal Resource Management Officer of CCEF. As CRM Officer, she manages and maintains the sustainability of the marine ecosystems in the Marine Protected Areas (MPA). She taught Marine Biology courses before becoming an experienced diver  to apply theories she learned  and taught in school. CCEF projects such as project S.U.S.T.A.I.N. has done a huge step for marine life sustainability.   CCEF partnered with USAID and EcoGov paved way to the establishment of numerous Marine Protected Areas across the Philippines; twenty-two (22) and counting as of now. 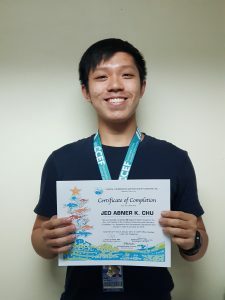 He is a student of Sacred Heart School – Ateneo de Cebu who had his internship in CCEF. His experiences in CCEF is somewhat a rewarding experience filled with adventure and learning. CCEF made him learn more about Marine Ecosystems and even improved his communication and leadership skills. 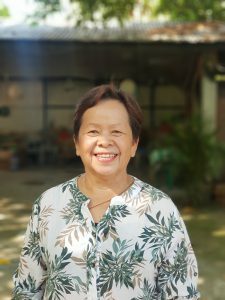 This former councilor and also known as Kagawad Sol is a staunch advocate of environmental  protection in Barangay Cotcot, Liloan, Cebu. During her last term of being the Councilor, the civil authority hand-picked her collectively for being a caretaker of the mangrove areas in Cotcot. She makes bound that people who come to visit the mangrove rehabilitation areas understand the importance of mangroves especially in the coastal areas. On the other hand, she has been the focal person of CCEF for almost 13 years when it comes to Mangrove-related activities in her town because of her willingness to help and share her knowledge to other people about Mangroves.

Over the last week I have taken some time to reflect on my first impressions of some of the methods used to set up Marine Protected Areas in the Philippines under the guidance of CCEF. One thing has stood out in stark contrast. In my previous experience and thoughout the majority of my studies on MPAs, the action to form them along with their regulation and policing were all carried out by either state or federal government agencies. This is thought to lead to strong MPA design and implementation through scientific, financial and legal backing and support. My home state has in excess of 25 established and proposed MPAs that have followed this model. State legislation in Australia covers all water out to three nautical miles offshore.

The planning process for developing the marine reserves in the state has recently changed. The planning for the latest marine reserve was carried out entirely within government, forgoing initial community and stakeholder consultation. This resulted in the publication of a proposed management plan that was released for public comment. This change in the planning procedure came about due to strong objections to several aspects of previous planning processes and delays in the completion of trials involving working with major stakeholders to consider alternative planning methods and processes. The management plans of any proposed MPA can be amended following the analysis of public comments and submissions. However local political issues have arisen in the past due to some stakeholders believing there is insufficient room and respect for their input.

Working on the island province of Siquijor I have been able to see first-hand the social focus that CCEF prioritises in its aim to restore and preserve the marine environment. This has resulted in a great drive shown by members of the local community and they are some of the most dedicated divers I have had the pleasure to work with. Every dive day I see without fail members of the local government units (LGUs) from the local Barangays, Municipalities and even Provincial offices. These include staff from the fisheries departments, agricultural organisations and the police force among others. As well as these members of government the local fisherman and business people and their families are always willing to support the work that we are carrying out and it is great to see so many men, women and children taking active roles. They undertake these efforts that support MPA establishment and rehabilitation in addition to their regular job. Furthermore not only do these locals work on the MPAs in their own Barangays or Municipalities but travel the island under the guidance of CCEF staff to help contribute to the Provincial wide agenda that all levels of the government are supporting. The locals are also pooling resources to share the burden of such activities as policing their MPAs.

It is great to see that the hard work the CCEF team have put in has encouraged and developed such a positive and significant community response . To look around the local people working with me and seeing that they are intimately involved in the project and aware of its worth and associated benefits to the future of the community has been, in the short time I have been with the CCEF, incredibly satisfying. In short I see directly that all who believe in the work carried out by the foundation are not only supporting great scientific research but also are directly benefiting the communities where the organization is active.

Less than 24 hours after I had landed in Cebu I was heading to one of the CCEF’s monitoring and rehabilitation sites. A taxi, a bus ride, a ferry, a jeepney, another ferry and a tricycle ride later I arrived in the municipality of Lorena on the southern island of Siquijor.

The island province of Siquijor contains no less than 17 marine protected areas (MPA) all of which are managed by the local community with the help of CCEF, both of whose members greeted me enthusiastically upon my arrival. When Typhoon Haiyan/Yolanda hit, much of the island’s 12.3 km2 of coral reef was heavily damaged. The local community and CCEF have been working hard to study, stabilise and rehabilitate the damaged reefs. It was to help with these efforts that I had made my way to the island so quickly, diving straight into the proverbial deep end (though the reefs all sit in reasonably shallow water!)

We set to work in the morning with a short briefing and a quick dive so that I could see the extent of damage myself. Even with so much damage the site of my first dive in the Philippines was full of marine plant and animal life – including my first encounter with a sea snake!It’s astounding to think how the reef must have looked in its prime before the typhoon. Our work for this type of coral reef rehabilitation is divided into two main parts. The first dives I took part in were used to secure a base on suitable sites as a foundation for coral transplantation and growth. From previous CCEF studies a mat/netting material has been selected that has been shown to be non-toxic to corals and the marine environment, securable and successful in supporting coral growth. Other factors were also taken into account such as access through the material to enable the movement of marine fauna and the suppression of algal growth.

Once these nets were secured in place the coral transplantations could begin. All coral fragments are chosen from the local site. One diver in each group was designated as the ‘coral finder’, in this instance they had to travel quite far to source enough fragments for each mat. Coral fragments are chosen using a number of variables including being of a size that allows attachment to the nets, having a minimum proportion of living coral upon the fragment and already being detached from the reef. This is to ensure good growth and resilience. The fragments are then attached to the mats and photo documentation taken to allow for proper monitoring and evaluation.

All in all this first experience with the CCEF served as a great introduction to the Philippines, her people and her natural treasures. To be doing my part for conservation and natural resource management has always fuelled me and my first week working in the Philippines has proven to be both educational and enjoyable.

My name is Alex Johnson and I’m an Australian Volunteer for International Development (AVID) based in the Philippines for eight months of 2014. I have been granted an opportunity to work with the Coastal Conservation and Education Foundation (CCEF) as a Research and Monitoring Team (REMOTE) research assistant and marine protected area (MPA) monitoring officer. Coming from a background of wildlife conservation and biology (both terrestrial and marine) I will be working on projects relating to coral reef rehabilitation, community engagement and training and of course some obligatory office work!

I’ve set up this blog to share my thoughts on working as a biologist, educating people on conservation matters and practices and to share the experience of working with the CCEF throughout the Philippines. Stay tuned for weekly episodes of what the Philippines has to offer us and what we can offer the Philippines.