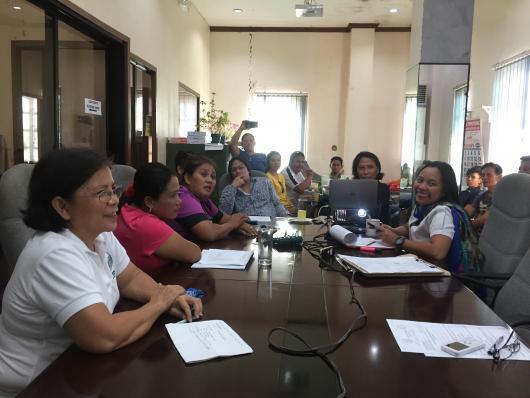 CCEF is now a member of the Municipal Development Council in Argao, Cebu province. On behalf of CCEF, Ms. Edith Lasula, currently CCEF Administrator and Finance Officer (AFO), attended the First Civil Society Organization (CSO) meeting of the Municipality of Argao, Cebu province on January 25, 2018. The purpose of the meeting is the election or assignation of various accredited CSOs in Argao to the different Local Special Bodies (LSBs). Under the Local Government Code of the Philippines (Republic Act 7160) LGUs are mandated to create the LSBs to allow greater representation and participation of CSOs composed of non-government organizations (NGOs), people’s organizations (POs), cooperatives, among others, in local governance. Eighteen NGOs, POs and cooperatives attended the first CSO meeting in Argao this week which was chaired by the Local Chief Executive, Mayor Stanley Camanero. At least seven LSBs were created to include: the Municipal Development Council (MDC), Local Health Board (LHB), Local School Board (LSB), Municipal Peace and Order Council (MPOC), Municipal Council for the Protection of Children (MCPC), Municipal Solid Waste Management (MSWM), and Municipal Disaster Risk Reduction and Management Council (MDRRMC).
CCEF was one of 15 CSO members assigned to be a member of Argao’s MDC. One of MDC members’ roles include being the “watchdog” of projects to be implemented in the municipality of Argao. CCEF has been accredited NGO in Argao in October 2017. Argao is one of the partner LGUs in the CCEF-PCSSD collaborative project on reef assessment and capacity development for reef rehabilitation currently being implemented in southeast Cebu.