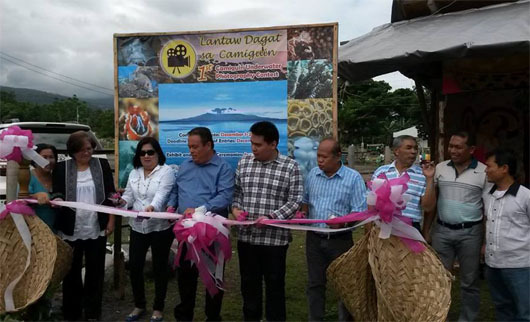 Camiguin is a gem of an island found in Bohol Sea, between mainland Mindanao and the Province of Bohol. With seven active volcanoes, it is also known as the Island Born of Fire. The island’s geology gives the island its numerous waterfalls, hot springs, and a highly diverse flora and fauna. Not many people know that what lies below the seas surrounding Camiguin is a collection of natural underwater attractions. It is for this reason that the Lantaw Dagat sa Camiguin was launched – to show to the rest of the Philippines and the world that its second smallest province is as interesting as the more well-known dive destinations in the country.

Lantaw Dagat sa Camiguin was an underwater photography contest sponsored by the Camiguin Coastal Resource Management Project (CCRMP) of the New Zealand Aid Programme (NZAP) and the Provincial Government of Camiguin. Held in the first week of January, 2014, the contest was open to all amateur underwater camera buffs, foreign or local. The event provided an opportunity for diver-photographers to converge and promote the Province’s best kept jewels.

The best pictures were displayed in a gallery located at the Ugmad Grounds at the Camiguin Tourism Center. Opened on January 6, 2014, the inclement weather did not stop the thousands of curious spectators who watched in awe the pictures that showcased the island’s rich underwater heritage. Judging the winning pictures fell into the hands of a panel of accomplished individuals composed of a) Miguel Alfonso Ramon “MiG” Ayesa, diver-photographer who was part of Rockstar:INXS, the search for the next lead singer of INXS; b) Miles Andrew Roces, former 3rd District Congressman of Manila; c) Andre Snoopy Montenegro, an underwater photographer, scuba diving instructor and owner of Scuba Ventures; and d) Johnny Cabreira, professional photographer and videographer.

Winners of the contest received cash prizes and a specially-designed trophy. The winners will have a chance to contribute to the Philippine tourism exhibit showcasing Camiguin at the international tourism expo in London.

Another important event that recently took place in Camiguin was the launching of the Camiguin Biodiversity booklet. In line with the weeklong celebration of the 46th Founding Anniversary of the province, Governor Jurdin Jesus Romualdo presented the book during his State of the Province Address. Found in the book are the unique species found in the 31 Marine Protected Areas that line the five municipalities of the province.

Together with the photo-exhibit, the book is contributing to capturing the attention of foreign and local tourists seeking a place for unwinding, adventure, and recreation. These products by CCRMP have inspired locals to protect their beautiful natural resources and are attracting tourists to enjoy Camiguin’s natural treasures. The Camiguin Coastal Resource Management Project is a joint venture of NZAP and ANZDEC-CCEF to improve Camiguin Province’s coastal resource management (CRM) initiatives. One major goal of the aforementioned activities falls under the strategy to strengthen the ecotourism and livelihood aspects of Camiguin’s CRM plans.