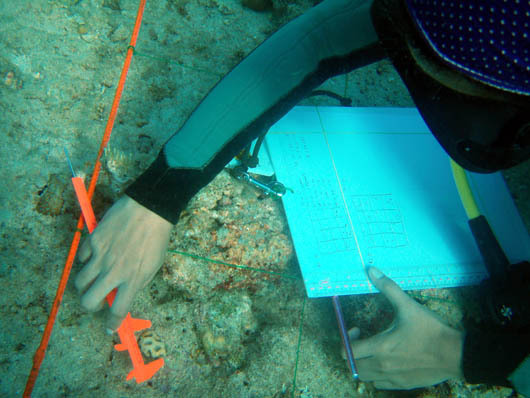 The severe loss of life and damage to infrastructure from Typhoon Pablo (known internationally as Bopha), was well publicized around the world. Large portions of Mindanao and the central Philippines were devastated by the late-season typhoon for a damage estimated at Php 36.949 billion nationwide and affected 711, 682 families or 6,243,998 people in more than 3,000 villages in 34 provinces . The tragedy was enough to elicit an uncharacteristically emotional response from the lead negotiator from the Philippines to the United Nations climate change conference in Doha that was underway at the time While the effects of the storm were well publicized, not mentioned in the news was the severe damage to the coral reefs in the area. It seems a small thing when compared to shore-side devastation. But the reefs are the foundation of essential marine and fisheries resources in the Philippines,and their loss will have an increasing negative effect on the local economies for years to come. CCEF is on the front lines and hopes to at least mitigate the severe devastation through a coral reef recovery plan based on standard scientific assessment methods and research findings

Preliminary coral reef damage assessment in selected marine protected areas in Siquijor by the Research Unit of CCEF and Siquijor local government units/Provincial Research and Monitoring Team (PROMOTE), documented a massive devastation of coral reefs – transforming once rich coral reef areas into rubble fields. Homogenization of once diverse and rugose reef habitat means loss of habitat structures for many marine organisms including commercially important fish species. While no one can immediately repair the damage, CCEF’s Research Unit has begun a coral reef recovery and resilience study (CRRR) to provide science-based recommendations to local communities to assist in their coral reef recovery plans. This study is both urgent work, to assist in current recovery and protection planning, and a long-term investment for a better understanding of reef damage from serious storms which are predicted to increase as climate change progresses. With its position in the central Philippines, its technical expertise, and its long-time involvement with local communities, CCEF is uniquely positioned for this work. We cannot prevent storm damage, but with enough support and local cooperation, we can minimize the long-term effects.

Beginning January 2013, CCEF implemented a CRRR in selected MPAs in Siquijor Province, with the support of existing projects funded by UNICO (an Australian based IT firm) and Deutsche Gesellschaft für Internationale Zusammenarbeit (GIZ), a German based institution and Siquijor LGUs. Coral reef damage in southeast and southwest Cebu will be assessed this year as part of the MPA monitoring in that area, again, funded by UNICO. The Philippine Foundation for Environment (FPE) also partially supports CCEF in this work through a small grant whose overall goal is to develop new knowledge on effective MPA designs. This research is led by Dr. Aileen Maypa, CCEF’s Research Director and team: Michelle Baird: CCEF Siquijor- GIZ Coordinator, Dean Apistar: Research and Monitoring (REMOTE) Coordinator, Reann Catiting, Siquijor Community Officer, Darell Pasco and Alvin Laping: Siquijor LGU /PROMOTE.

Storms such as Pablo (Bopha) will not be limited to the Philippines. While CCEF’s primary focus is to assist marine resource recovery in the central Philippines, we hope also to make a contribution to the international scientific community’s understanding reef storm damage world-wide.

What is the impact of a well-designed MPA during strong storm surges? The Story of Sumilon Island and San Vicente, Cebu after the typhoon.