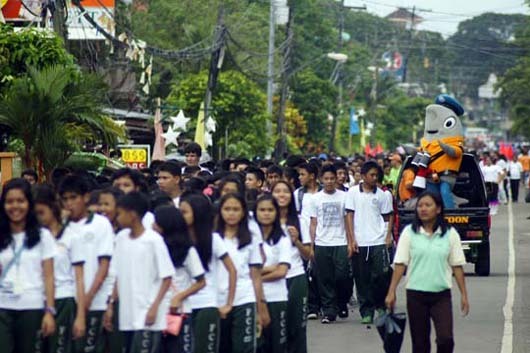 Uncle Inggo, a big-eyed jack from Mahinog, leads the parade as Camiguin proudly launched its two interpretive centers and 5 mascots

The Camiguin Coastal Resource Management Project (CCRMP) launched five Marine Protected Area Ambassadors (mascots) in the municipalities of Mahinog, Sagay, Mambajao. Catarman and Guinsiliban. It also inaugurated two interpretive centers to the Municipalities of Mambajao and Guinsiliban during the celebration of the 45th year founding anniversary of the Province of Camiguin. The CCRMP was subcontracted to CCEF by the New Zealand Aid Programme (NZAP) in 2012. The mascots, that represented the identified marine flagship species of each municipality, attracted the the attention of Camiguingnons who converged at the Camiguin Tourism Center during the parade of Camiguin Day celebration in January, 2013.

Uncle Inggo (big-eye jack) of Mahinog was the first to arrive followed by Mukoy the Mukos (squid) of Sagay, Tuti (sea turtle) of Catarman, Aleah (banner fish) of Guinsiliban and Baby Pagang (branching corals) of Mambajao who amused the audience as she walked on the ramp waving and dancing before an estimated crowd of ten thousand people in the grandstand. The program host introduced them as symbol of protection and conservation of the coastal and marine resources of Camiguin Island.

In the afternoon of the same day the Camiguin Interpretive Center was inaugurated though the signing of the Memorandum of Agreement (MOA) between the Province of Camiguin represented by Governor Jurdin Jesus M. Romualdo and the municipality of Mambajao represented by Mayor Maria Luisa D. Rumualdo and witnessed by the SB Raquel Ranara and Evelyn Deguit, Team Leader of CCRMP. New Zealand Aid Programme (NZAP) Project Manager in the Philippines Joseph Imperial and Estrellita Boskovic were among the special guests.

The Congressman of Camiguin, Pedro P. Romualdo, told a story of his personal account on the eruption of mount Hibok hibok 1951 during his speech at the inaugural ceremony of the interpretive center.

The Sad State of Casay and Tulic Reef in Argao, Cebu