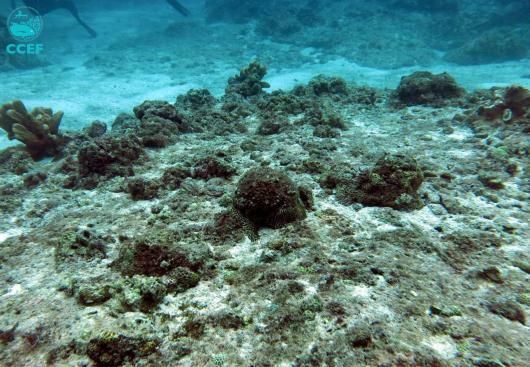 Super typhoon Yolanda (Haiyan) not only devastated human lives and shelter. Coastal habitats and resources such as mangrove forests and coral reefs were also severely damaged, threatening food security through declines and loss of fish stocks and other marine resources. To contribute to post Yolanda recovery and restoration, CCEF in partnership with 3 Villages + 1 Goal (3V+1G) and the Municipalities of Daanbantayan and San Remegio carried out a Rapid Damage Assessment in selected marine protected areas (MPAs) and vicinity in the aforementioned municipalities from December 16-21, 2013.

Mangrove damage was estimated at 2 ha in Malapascua to more than 10 ha along San Remegio coast. Percent live hard coral cover (LHC) in all assessed reefs was poor (3 to less than 20%). Evidence of both typhoon damage and blast fishing were observed in both Carnaza and Gato Islands while only typhoon damage was observed in Coral Garden Marine Sanctuary in Malapascua. Rubble patches and upturned massive corals were common. In San Remegio, seven MPAs were assessed and %LHC was also poor (less than 2 to 14%). Significant decreases in LHC from the year 2009 to 2013 coupled with increases in nonliving substrate components such as rubble, sand and rocks were common patterns in most MPA sites. Fish declines in both target and all reef species in most sites were also recorded.