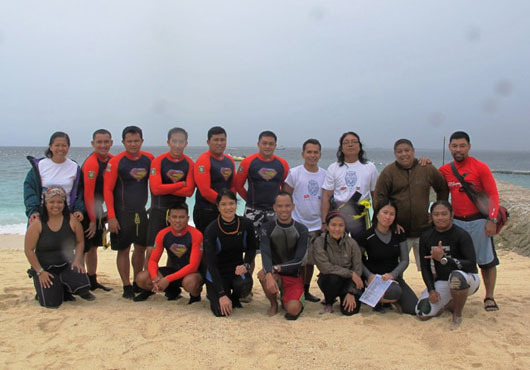 As a first class, highly-urbanized city in the province of Cebu, Lapu-lapu City’s experiences with rapid urbanization continues to grow at a steadfast pace, making it a booming metropolis. This growth also makes it susceptible to more threats to the environment, so the city increased its efforts in pursuing protection and preservation of the environment. In 2012, Lapu-lapu’s new tourism frontier was launched to safeguard Olango’s fragile ecosystem and to attract more tourists. The local chief executive in the city, Hon. Paz Radaza challenged all constituents of Lapu-lapu to take a stand to care for and save the environment, since “Oponganons’” life and tourism industry depends on it.

With the growing number of marine sanctuaries established, the City realized the need to create a local monitoring team to keep tabs on the health and status of the coral reefs. Hence, an MPA Monitoring Training was conducted through the Danajon Bank Project of the Coastal Conservation and Education Foundation, Inc. A total of 21 participants from Task Force Kalikasan, dive sector, City Environment and Natural Resources Office (CENRO), City Fisheries and Aquatic Resources and Management Council (CFARMC) and Network Early Response on the Verge of Emergency (NERVE) actively participated the 3-day activity from January 29-31, 2013.

The participants of the MPA monitoring training were taught the standard scientific methods of monitoring marine protected areas: coral reef substrate assessment using point intercept transect (PIT) and coral reef fish visual census (FVC) with SCUBA at 6 meters depth. In addition, comprehensive discussion on the identification of the coral colonies and other invertebrates including practical application and simulation exercises were carried out to allow the team to be acquainted with coral reef substrate ecology.

After the lecture-discussion, an exercise on fish identification and fish size estimation was performed by the participants in order to gauge their level of skills in conducting fish visual census. The process did not end there as the data collected was also processed and interpreted then presented to the stakeholders.

Even after this workshop, there is still a need to deepen the training of the reef monitoring team and diligent practice needs to be exercised to improve their skills. Thus follow-up capacity-building activities are already in the pipeline. With the unrelenting support of the Lapu-lapu City government, in partnership with CCEF, the team is expected to enhance their specialized skills in due time.