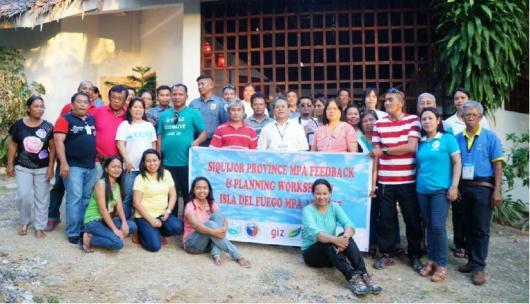 The Province of Siquijor is currently experiencing many challenges in coastal resource management and food security. Coral reef damage from typhoons Sendong, Pablo and Queenie in the years 2011, 2012 and 2014, respectively, decimated most of the live hard corals in the eastern side of the island encompassing the municipalities of Maria, Enrique Villanueva and parts of Siquijor, Lazi and Larena Municipalities, with up to 94% damage (Maypa et al. 2014a). The large scale loss of corals, which are habitats for tens of thousands of marine organisms, including fish, has been documented to cause a sharp declines in reef fish abundance and biomass in Siquijor Province (Maypa et al. 2016) and, up to 75% decrease in fish catch (Maypa et al. 2014b).

A coral reef recovery study in eight priority marine sanctuaries (i.e., Bogo, Candaping B, Olang Marine Sanctuaries in Maria; Binoongan and Tulapos Marine Sanctuaries in Enrique Villanueva; Caticugan Marine Sanctuary in Siquijor, Napayong Marine Sanctuary in Lazi and, Nonoc Marine Sanctuary in Larena) was started in January 2013. One major objective was to develop a low cost, community – and local government unit (LGU) – friendly coral reef rehabilitation protocol, that can increase the resilience of coastal communities against the adverse effects of climate change while using the marine protected area (MPA) as the primary tool. The Coastal Conservation and Education Foundation (CCEF) with the support of the UNICO Conservation Foundation in Australia, under the leadership of Dr. Aileen Maypa, spearheaded this initiative in partnership with the Siquijor Province through the Office of the Provincial Agriculturist and its CRM Section. A German cooperative agency, GIZ- ACCCoast, also provided CCEF support for the development and fabrication of substrate stabilization and reef fish recovery tools in 2013 to 2014. By the years 2015 to 2016, this effort has been sustained by the Silliman University Institute of Environmental and Marine Sciences (SUIEMS) in partnership with the Foundation for the Philippine Environment (FPE), CCEF – UNICO and Siquijor Province.

To enhance further our efforts in contributing to the resilience of coastal communities against climate change, a CCEF project which aims to identify and protect coral reefs that are sheltered from typhoon tracks, was also implemented by CCEF in 2015 with support from GIZ-PAME. As a result, two more marine sanctuaries were established in the Municipality of San Juan and one MPA was expanded to include more resilient reefs. To date, Siquijor has 20 marine sanctuaries and 8 are being closely monitored for recovery. We envision coral rehabilitation as the cure and protecting resilient reefs as the preventive measure.

In addition to the ecological challenges in the island, the MPA Enforcement and Coastal Law Enforcement in general, will benefit greatly if supported by its government leaders. Dedicated enforcers are often subject to death threats and some are killed while defending their cause. Without support from the government, unfortunate consequences are inevitable. This is a common scenario in the Philippines and Siquijor Province is not an exception. Thus, a multi – sectoral province – wide feedback and planning workshop was called with representatives from the 20 MPAs, LGUs, the Province and line agencies in March 22, 2016. This is a concerted effort of SUIEMS-FPE, CCEF-UNICO-GIZ and the Office of the Provincial Agriculturist of Siquijor Province with full representation from the Siquijor Philippine National Police – Provincial Monitoring Team (PNP-PROMOTE) members. We consolidated the results of all CRM/MPA projects running on the ground in Siquijor Province to find solutions to identified problems and issues. A task force that will tackle the enforcement challenges in the Province was created, among other suggested solutions.

Before ending our very challenging day last March 22, we recognized and awarded our sacrifices, hard work and best practices in CRM and MPA management. Most of the MPAs in Siquijor are small and less than 20 ha, thus, these MPAs will not qualify to the national MPA awards spearheaded by the Marine Protected Area Support Network (MSN). Keeping this in mind, we created the “Isla del Fuego MPA Awards” for the year 2016 with the theme, “ Ang atong pag-atiman sa sangtuwaryo karon, atong abundang kaugmaon.” Among the 20 MPAs, the following were the winners: (1) Best MPA: Binoongan Marine Sanctuary in Enrique Villanueva, (2) Most Popular MPA to Ecotourism: Paliton Marine Sanctuary in San Juan, (3) Most Improved MPA in Fish Stocks: Caticugan Marine Sanctuary in Siquijor, (4) MPA with Best Community Support: Binoongan Marine Sanctuary, (5) Most Enterprising and Active MPA in Generating Livelihood: Maite Marine Sanctuary in San Juan and (6) Best MPA Enforcement Team: Tulapos Marine Sanctuary in Enrique Villanueva. The individual awards were: MPA Champion of the Year (Danilo Casalta, MAO of Maria) and Outstanding Coastal Law Enforcer (Mr. Darell Pasco of the Office of the Provincial Agriculturist, CRM Section). We envision to institutionalize Isla del Fuego MPA Awards so as to encourage CRM and MPA practitioners in the Province to sustain their efforts in marine conservation and food security.

A large scale coral reef damage requires novel solutions and a sustainable multi – sectoral effort that also requires cooperation from each community member and partnerships across different sectors. In cases such as this, it is a must that LGUs take the front line for coral reef recovery to take place. Siquijodnons can adapt to the negative impacts of climate change and are willing to work for the island’s food security.

Empowering the Youth for Sustainable Tourism