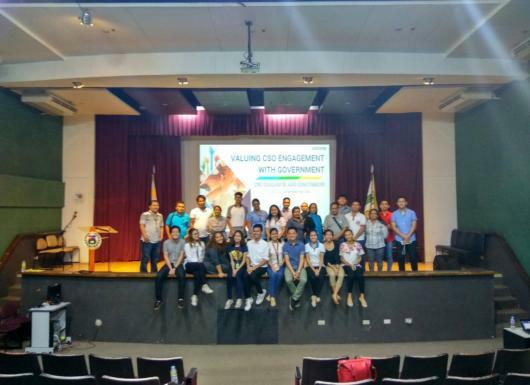 The Central Visayas Network of NGOs held its 11th General Assembly at the Gansewinkel Hall , University of San Carlos, Cebu City last April 27 to 29. With the theme “Valuing Civil Society Organization Engagement with Government”, the thrust of the event was to create a dialogue and discussion among Civil Service Organizations (CSOs) within the region and consult representatives on the status and future of Philippine Democracy.

Anthony Dignadice, the Chairman of the Board of Trustees of the Central Visayas Network of NGOs (CEVISNET) said in his welcoming speech that the civil society can “constructively engage and work together for development”.

For the first day, sessions were held between the attendees and the National Economic Development Authority (NEDA), Department of Interior and Local Government (DILG), and the Department of Budget and Management (DBM).

Carreon discussed the CSO-related strategies of The Philippine Development Plan 2017-2022. This is the first medium-term development plan anchored on the national long-term vision named AmBisyon Nation 2040. The plan promotes a people-centered, clean and efficient governance. Parts of its goals include ensuring people’s safety, building resilience and ensuring ecological integrity.

The last session for the first day of the General Assembly focused on the statement of FORGE on Disaster Risk Reduction- Climate Change Adaptation and Good Governance- SK Reform and Youth Participation by the University of San Carlos- Supreme Student Council.

Day two marked the forum on Philippine democracy and human rights issues led by the Commission on Human Rights and CODE-NGO. Attendees were encouraged to join in the signature campaign on the following concerns:
1. No to EJK
2. No to Death Penalty
3. No to the Lowering Minimum Age of Criminal Lability
4. Yes to Local Planning and Budgetting
5. No to Con-Ass, Yes to Con-Con

The 11th CEVISNET General Assembly was done in partnership with the University of San Carlos- Supreme Student Council and the Caucus of Development NGO Networks.