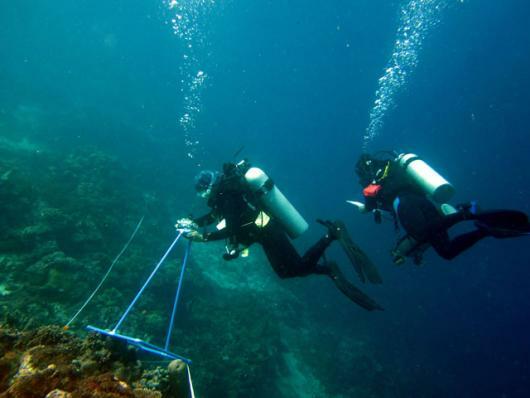 The Research Unit of the Coastal Conservation and Education Foundation led by its Research Director, Dr. Aileen Maypa and the Lapu-lapu Dive Rangers led by Mr. Andy Berame, conducted a coral reef assessment last May 11, 2013 at Maribago on selected sites along the operational route of the Yellow Submarine.

The Yellow Submarine is operated in Lapu-lapu City and was the first submarine tourism venture in the Philippine and is based at the Imperial Palace Waterpark Resort and Spa. Its operation was halted when Lapu-lapu City mayor, Paz Radaza, ordered to temporarily suspend the permit to operate while the investigation on the alleged coral damage is going on. A video in YouTube entitled, “Coral Crusher,” shows a yellow submarine hitting a coral reef slope. This video was uploaded by a certain Satoshi Toyoda last April 24, 2013.

A rapid assessment was carried out at 20-25 m depth along the coral reef slope using a systematic photo-quadrat method to evaluate the substrate and, an underwater visual census (stationary point count method) was used to estimate the fish. Observed broken and turned over coral colonies were recorded and measured. The data of this assessment is currently being analyzed. Our findings will be forwarded to the Lapu-lapu city mayor’s office with recommendations on how to improve and incorporate eco-friendly guidelines in the operation of this tourism business.