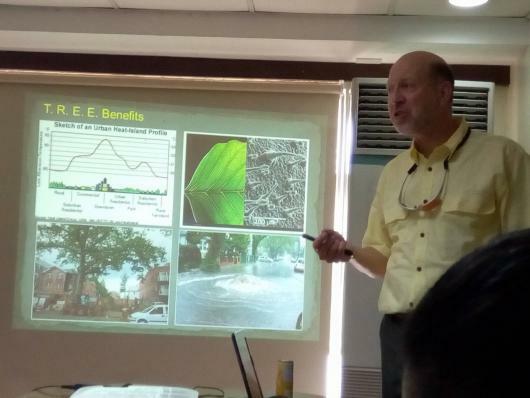 Carsten Glaeser, an expert on Horticulture and sustainable development gives a lecture to members of the Cebu Development Council. He is a senior consultant of the Glaeser Horticultural Consulting, Inc in Flushing, New York, U.S.A.

May 23, 2018 – The environmental Sector of Cebu Development Council (CDC), together with 80 barangay captains of Cebu City and environmental NGOs, conducted a meeting about the importance of the environment in Cebu City at Delmar Hall, Cebu City Hall. The meeting focused on Solid Waste Management by which barangay officials were given the chance to present their problems and solutions about the increasing density of waste and flow of garbage that are being dumped into their respective areas.

Exempli Gratia at Barangay Pasil, a place known for being a fishing harbor, Hon. Julius Guioguio described their situation where the wastes of the slaughtered fishes are being discarded improperly. This led them to propose for a morning and afternoon garbage collection. Other barangays have also asserted a common problem of non-functional garbage trucks and have prompted their barangay officials to request for new garbage trucks in order to maintain their collection of wastes.

Philippine Coastal & River Guards Agroupation (PCRGA) gave an alternative way of countering waste problems through training all the barangay stakeholders in order for them to be aware of the laws and policies regarding the protection of rivers and coastal areas.