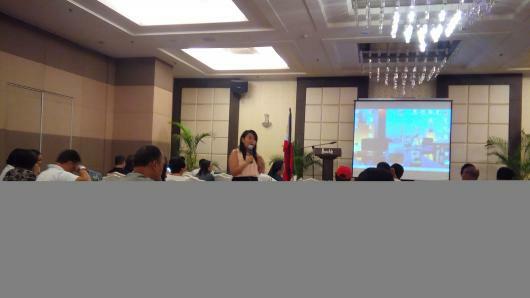 Participants of the Risk Reduction and Resiliency Summit engage in a discussion on how to address inadequacies in their local communities.

The Disaster Risk Reduction Management Office held its 1st “CSO-Barangay Interface: A Platform for a Resilient Cebu” last May 4 & 5, 2017 at Harold’s Hotel, Gorordo Avenue, Cebu City. It aimed to achieve a: 1.) Leveled off understanding on DRMM-CCA and the responsibilities of stakeholders especially local governments; 2.) Map out existing resources, expertise and replicable community practices in resiliency-building; and 3.) Identify strategies and a platform for convergence of initiatives in DRMM.

Engr. Arnie Balaba, ARD, Office of Civil Defense invited LGUs and CSOs / POs for the two-day workshop and for the continued support of the Office of Civil Defense. He said that the Philippines is prone to disasters due to its warm ocean waters, coastal homes, the occurrence of deforestation, the country’s position within the Ring of Fire and the absence of mitigational plans. He elaborated on the risk profile of the Philippines which causes the country to experience an average of 20 typhoons yearly and 20 quakes per day . There are 7 major fault lines in the province of Cebu.

An NDRMMMC text update was sent to everyone who had cellphones during the seminar. Engr. Balaba recommended for the completion of LDRRM Plans, integration of hazard assessment into the CLLP, institutionalizing the DRRM Office, enhancement of Coordination Centers, organization of community volunteers and training and equipping of respondent.

Facilitators from Fellowship for Organizing Endeavors (FORGE) grouped everyone into four, namely Preparedness, Prevention and Mitigation, Relief and Response and Rehabilitation and Recovery as part of the seminar. CCEF, Inc. joined the group of Relief and Response. CCEF once helped the victims of Typhoon Yolanda in Medellin, Cebu through donations and solicitations. CCEF also helped the fire victims of Banilad, Cebu, by gaving clothes and provisions as a way to contribute relief operations. As a CSO, one major concern voiced by CCEF was the transportation of relief goods. One of the proposed solutions was that the DRMM Office should prepare a vehicle ready for transportation of CSOs and POs and evacuation in Cebu City whose willingness and enthusiasm can help in times of disaster management.

Engr. Alfredo Quiblat, Jr., OIC PAG-ASA Cebu, reviewed the role of his agency in DRR and CC which are; EWS, Forecast and Advisories, R & D Support, Climate Change Scenarios and DRR Programs & Awareness. PAGASA will continue to closely monitor the situation and updates/advisories shall be issued as appropriate. With the increasing temperature in our country, the chances of heatstroke and dehydration among susceptible individuals has also risen. Due to the extreme heat, the possibility of having an open forum on the drying of rivers in Cebu City was also brought up.