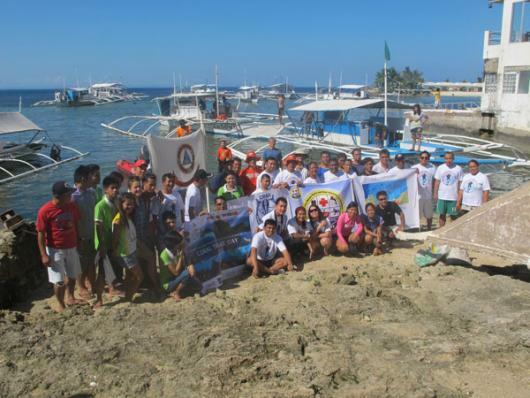 CCEF participated in a coastal cleanup last June 9, 2012 in celebration of June being the Environment Month. Another reason for the celebration was that June 8 was declared World Ocean’s Day, and June 9 was also Coral Triangle Day. A beach clean-up was held at Barangay Buyong near Boyla’s Resort while an underwater clean-up was made in San Vicente MPA off Olango Island.

CCEF staff composed of Dean Apistar, Bing Huerbana, Jimi Paguio, visiting researcher Angela Whitney, and Alen Yap joined 90 other volunteers coming from the Government Unit of LapuLapu City, the Philippines Coast Guard Auxiliary Central Visayas District 202nd Auxiliary Squadron, various dive shops, and beach resorts. The celebrations kicked-off at 7:30 AM. Soon, a massive pile of raked-up seaweed and garbage took shape. The garbage was composed mainly of plastic wrappers and bottles. The pile of seaweed, noted Commissioner Gary Cases of the Philippine Commission of Sports SCUBA Diving, is due to the high nutrient pollution of the waters of the beach front.

The underwater cleanup began soon after the beach clean-up was in full-swing. It was a perfect day for diving with clear skies and blue, calm water. Aside from plastic waste, a notable amount of discarded or lost fishing gears were picked-up by the divers. Lost fishing gears, aside from obviously polluting our seas, may continue catching fish. This is known as ghost fishing and should be reduced because it is obviously a waste of resources.

Back on the beach, the garbage collected on the beach and the trash picked up during the dive were all loaded into the garbage truck. There was a small discussion afterwards regarding how people can play a direct role in solving the marine debris problem. This particular celebration was a success, not only because of the garbage that was removed from our famous beaches, but also because of the education imparted on the people who were part of the coastal clean-up.