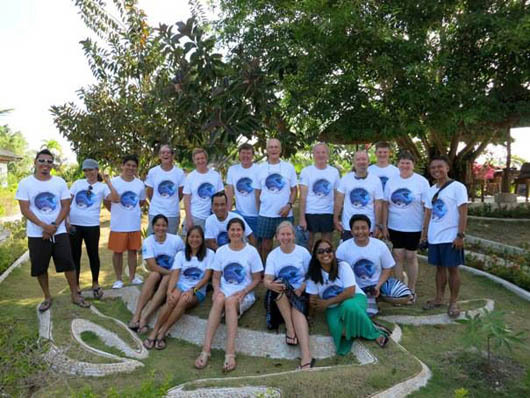 SPR 2013 participants, composed of expedition volunteers and CCEF staff pose for this group picture near the entrance of Kasai Village Resort in Moalboal, Cebu

We all met under the big umbrella by the pool at the Montebello Villa Hotel in Cebu during the course of the afternoon – Geoff, Denise, Sandy, Laurent, Sheree and Al from Australia; Julia, TJ and Mark from the US, and myself and Oli, my teenage son, from the UK. On this the 22nd SPR, we comprised a small but intimate group of 11, made up of entirely repeat volunteers, including Oli who had made his debut aged 10. Later, over a delicious Thai dinner, we caught up on the latest CCEF news and events with Alan and Vangie who’d recently arrived from Hawaii.

The survey area this year, Moalboal and Badian, was a new site for the foundation. The Kasai Village Resort, our lodgings for the week, was a 3-hour bus ride from Cebu, located at the end of a picturesque lane in a stunning location right on the seafront, directly in front of Negros Island, it’s overlapping mountains creating the most dramatic foreground to the fiery sunsets we watched from our verandahs.

The dive shop was immaculate and well organized. During the course of the week, the walk along the long jetty out to the waiting bancas became our daily commute and the accompanying boatmen were meticulous in their preparation and distribution of the gear.

Our practice/gear check dive/snorkel calibration was conducted on the house reef at Kasai, which was also the venue for our night dives. The numerous turtles and myriad fish populating the reef were a great introduction to the week to come.

Divided into 2 teams, all sites were surveyed both inside and outside the MPA to cover a significant stretch of reef. A number of the reefs had suffered considerable damage from the earthquake and typhoon which struck last year, decimating large areas of coral and leaving rubble in their wake. Tuble MPA was one of these and it was distressing to see how much damage had been wreaked. Saavedra MPA on the other hand, was covered in large swathes of branching and foliose corals with small groupers, many damsels, anthias and parrotfish, as was Lambog, even outside the MPA. Nudibranchs were a highlight, as was an enormous puffer fish wedged under a ledge. Overall, it would appear that corals in the area are gradually recovering from the devastation of recent natural events but the lack of fish biomass suggests that there is considerable overfishing.

CCEF had been given special permission to survey Zaragosa MPA (normally closed to divers) as the local bantay dagat were keen on obtaining data on the health of their reef. The area outside had been badly hit by the typhoon but the interior had fared somewhat better. Unfortunately, Alan was attacked during the snorkel by a fierce Titan Trigger Fish, probably protecting her nest, which managed to bite him on the hand, unluckily one of the few exposed areas of his body.

Pescador Island was a much anticipated dive and didn’t disappoint. The vertical wall was teeming with diverse species of Butterfly Fish and despite much rubble from the typhoon outside the MPA, we were rewarded with a sighting of a Giant Frogfish which had morphed into a lilac-mimicing sponge. Totally prehistoric in appearance and so well camouflaged, one diver managed to take photos without knowing what he was shooting until he surfaced and asked! On the second dive (escorted by a dive guide) we were led to another magnificent specimen of a yellow and brown Warty Frogfish. In between, we were treated to schools of rainbow runners, tiny neon-coloured anthias and a shrimp goby nestled in a sandy crevasse, complete with accompanying shrimp.

Night dives on the house reef were a treat – basket stars unfurling into giant lace balls; the tiniest frogfish spotted by eagle-eyed Agnes wedged tightly in a branching coral head; crabs of all shapes and sizes and thousands of thread-like worms, ragworms and darting sea fleas attracted to the lights.

CCEF staff were fantastic, as always, ensuring everything went to plan, although we did miss Sheryl’s smiley face this year. The evening presentations were informative and well-organised: Aileen presented her PhD thesis on fish overspill; CCEF staff discussed other diverse projects currently going on in the Philippines; Geoff gave a talk on the fantastic support which the UNICO Conservation Foundation (of Australia!) is providing in terms of funding.

Agnes revealed many sides to her multi-talents, not least her brilliant vocal skills at the beachside karaoke in Lambog, accompanied by baritone Dalton and tenor Mark. Dean, Danilo, Roxie, Dalton, Nip Nip and Raffy kept us all entertained with fish charades (a great way to learn new species, by the way) while Michelle showed you can take fab photos with a teeny camera.

Down time on the boat and underwater proved the perfect opportunity to shoot a ‘high-quality’ video of alternative survey techniques (expertly produced by Sheree) Gangnam style. Not only did divers participate but snorkeler Oli managed to join them at the bottom of the sea to complete the team. I’m sure CCEF will be making good use of it to showcase how much fun one can have on an SPR expedition!

A wonderful week was rounded off by cocktails at the Rock Bar and a BBQ on the beach expertly organized by the resort staff, who downed their uniforms and proceeded to perform the evening’s entertainment as well. The laughs, the underwater sights, the dedication and kindness of the staff and the camaraderie of the SPR team will remain with us all for a long time to come. One hopes that the data collected with this year by volunteer participation will enable CCEF to carry on its valuable work and save yet more Philippine reefs. So, until next year…..paalam!

Three is better than one: Mangroves, Seagrass, and Coral Reefs