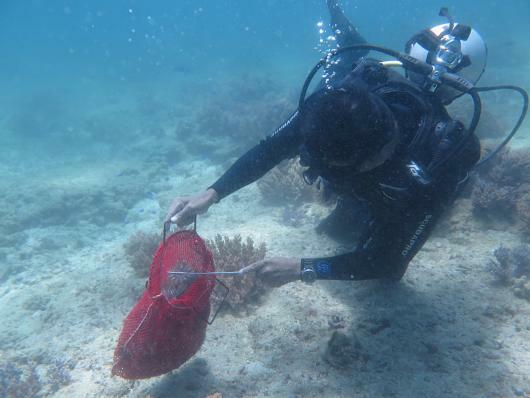 A diver collecting the COT.

Crown-of-thorns (COT) starfish, locally known as “dap-ag”, is a spiny sea star that naturally occurs in coral reefs. It is, however, also a carnivorous predator that preys on coral reef polyps. An individual COT adult is reported to consume up to 6 square meters of living coral reef per year. In large numbers, and in the absence of their natural predators, the COT can be deadly to reefs.

In Maite Marine Sanctuary, San Juan in the island province of Siquijor, a growing number of COT were observed in March this year by the Maite Resource Development Association (or MARDA). Alarmed by this observation and the possibility of a COT outbreak, MARDA, through its President Ms. Evelyn Malicay, organized a COT collection to reduce COT numbers in their waters.

Ms. Akiko Hamada-Ano, a US Peace Corps volunteer assigned in San Juan led the COT collection team which included MARDA members and partners from the Bantay Dagat, Siquijor Bureau of Fisheries and Aquatic Resources, Provincial Monitoring Team (or PROMOTE) under the office of the Provincial Agriculturist, Philippine National Police, Silliman University Institute of Environmental and Marine Sciences, and CCEF.

Together, the team collected a total of 409 COTs, mostly in the warmer shallow reef areas and less in deeper areas. MARDA is more vigilant in protecting their sanctuary; the COT collection is just one of many planned in the coming months.

Celebrating World Environmental Month for a Cause