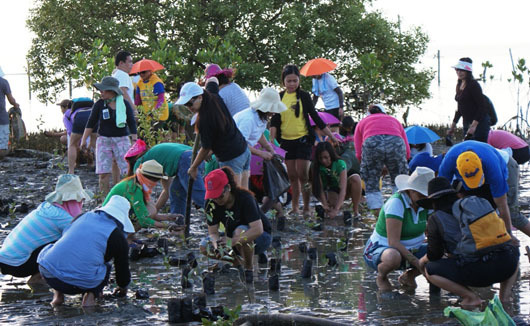 CCEF Executive Director Atty. Rose Liza Osorio praised the consistent effort and involvement of TIMEX and the cooperation of the local officials and volunteers of Barangay Cotcot in Liloan to the cause of the environmental preservation.

“When we plant trees, it impacts seven generations,” Osorio says. She added that we all need to safeguard the natural inheritance of our children and their succeeding generations.

Over a hundred staff from TIMEX, Barangay Cotcot local folks and volunteers planted 2,500 “bongalon” (Avicennia sp.) seedlings within the CCEF pilot site, in Sitio Sulima, alongside a river tributary in Barangay Cotcot, in Liloan, Cebu.

The theme of this year’s 43rd EARTH DAY Celebration is the Face of Climate Change. The emphasis, according to Analeh Patindol, coordinator of CCEF’S Adopt-A-Mangrove Project, is not how many trees you plant, but how many trees you grow. She says it’s important to sustain the growth of the mangroves trees that are planted. The mangrove planting site is monitored regularly by the Bantay Dagat watchers in Cotcot, Lilioan. CCEF’s Adopt – A-Mangrove is a one-year project which covers 2 hectares of land, each hectare to be planted with 10,000 seedlings. It is an offshoot of the “One Million Mangroves for Cebu” program of the government.

CEPA Billboards and Marker Buoys Installed in Cebu and Bohol

Sumilon Island and Olang Marine Sanctuary make it to the Top 5 finalists in the 2021 Para El Mar MPA Awards!