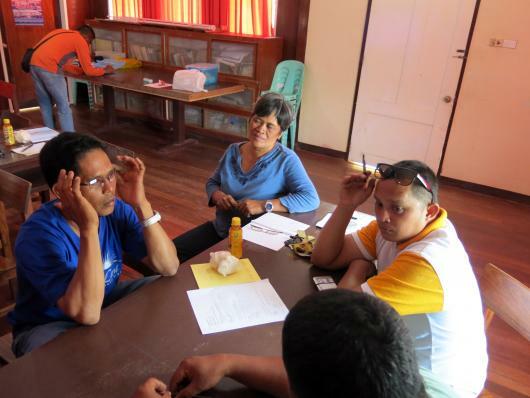 Some workshop participants from Binoongan and Tulapos marine sanctuaries management attended by its Baranagay Captains and Barangay Councilors, including the Fisheries Technician of Enrique Villanueva Municipality.

Over the years, many studies have documented that marine protected areas (MPAs) are effective tools for biodiversity conservation, fisheries benefits and livelihood through ecotourism. Since early 2000, CCEF has been a partner of Siquijor Province in various Coastal Resource Management Projects (CRM) including MPA establishment, monitoring and management. To date, the Province has 21 MPAs and its management comes with challenges and successes. One of the biggest MPA challenge is how to sustain enforcement. Being a MPA Bantay Dagat in Siquijor Province, still means “voluntary to very to very little pay,” in most of these PO – LGU (People’s organization – Local Government) managed marine sanctuaries.

A paper by Maypa et al. (2012) on investigating MPA effectiveness in the Philippines from 551 MPAs, documented that the lack of MPA financial sustainability mechanism was a concern for most MPAs across different levels and, was highest in level 3 (enforced), using the MPA Rating System developed by CCEF. One major recommendation of this study was to include financial sustainability schemes in the MPA sustainability plan. The MPA Rating System was the precursor of what is known now as MEAT (MPA Effectiveness Assessment Tool).

In August 30, 2017, CCEF-SUSTAIN Project conducts a MPA Sustainability Planning and Workshop in partnership with the CRM Section of the Office of the Provincial Agriculturist of Siquijor Province. The participants included members of the MPA management bodies of Binoongan, Olang and Tulapos Marine Sanctuaries. These MPAs were three of the eight MPAs beneficiary MPAs under CCEF’s coral reef rehabilitation program in 2014 -2016 after the coral reefs of Maria and Enrique Villanueva coasts were decimated by typhoons Sendong and Pablo in the years 2011 and 2013, respectively. We plan to open these selected MPAs to ecotourism for both MPA sustainability and livelihood recovery. These sites can serve as learning areas for coral reef rehabilitation, at the same time offer “coral rehabilitation diving” to interested eco – divers wanting to learn how to help typhoon – damaged reefs recover after a one to two days certification training offered by CCEF in partnership with Siquijor Province. Project SUSTAIN is supported by the UNICO Conservation Foundation in Australia.