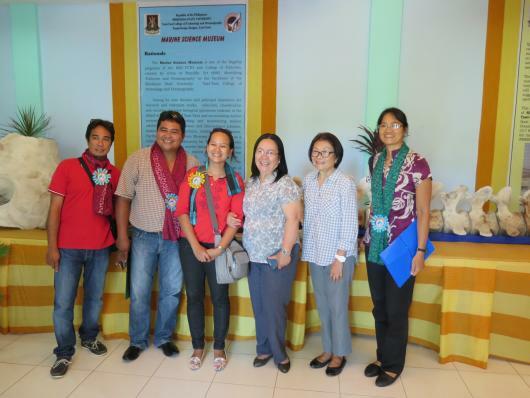 NCES 2016 participants from CCEF, SU-IEMS and Siquijor Province, MSU-Naawan and FPE posing in front of the MSU-Tawi-tawi Marine Museum.

A National Conference on Environmental Science was recently held in Bongnao, Tawi-Tawi hosted by Mindanao State University participated by more than 200 students, teachers, scientists and Environmental Science practitioners last July 8-10, 2016. The theme of the conference is “Breaking barriers and bridging sciences toward healthier ecosystems and sustainable development. Michelle Baird presented a paper entitled, “Protecting resilient coral reefs through multisectoral partnerships,” as part of the GIZ-PAME supported project of CCEF. Further, Dr. Aileen Maypa gave a talk on, “Can a marine protected area be used as a resilience tool for climate change?” This talk integrates the MPA coral reef monitoring work of CCEF since early 2000 combined with the recent projects of CCEF and Silliman University – Institute of Environmental and Marine Sciences on coral reef recovery and rehabilitation in typhoon-damaged areas. The coral reef recovery and rehabilitation project of CCEF supported by GIZ-ACCCoast and UNICO Conservation Foundation from the years 2013 to present and, in partnership with SUIEMS from the years 2015-2016 supported by the Foundation for Philippine Environment. Reaan Catitig and the Coastal Resource Management Section Head of Siquijor Province together with his staff, Darell Pasco and Rolly Jun Romano, respectively, also attended the conference with the CCEF team.