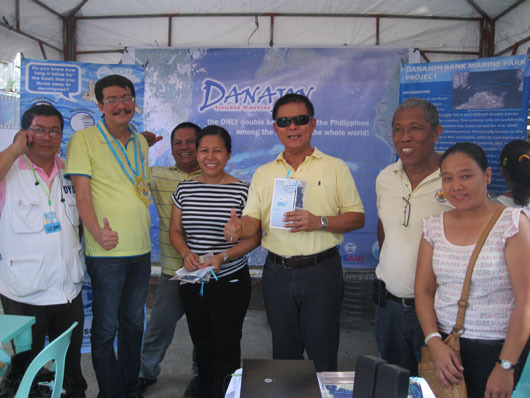 On the occasion of the 12th Cityhood Anniversary of Maasin City, Southern Leyte on August 10, 2012, Mayor Maloney Samaco and Congressman Roger “Oging” Mercado formally opened the week-long celebration through a ribbon cutting ceremony. This year’s celebration Maasinhong Ajonay sa Asenso Magpatunhay encapsulates the qualities of the people of Maasin working towards progress and development through cooperation.

In line with the Charter Day celebration, various booths showcasing the agricultural produce of the City added color to the festivities. Thus, the Danajon Bank Project in partnership with the City of Maasin through the Office of the City Agriculturist set up an exhibit highlighting the different initiatives to gain support of the populace at the same time bring the Danajon Bank Double Barrier Reef closer to the people. It is also a fitting event to impart information about this unique geological formation that has been carved for over 6,000 years of coral ecosystem development. Unfortunately, even fishers are not familiar of the existence of this unique and valuable resource.

According to Mayor Samaco of Maasin City, the City strongly supports the project which is manifested through the signing of the Memorandum of Agreement to manage the Danajon Double Barrier Reef. He was the very first of the 19 Mayors who signed the MOA. He also added that with the support of the different NGOs, illegal fishing activities in the area has been minimized. The City has started the mangrove rehabilitation project in Barangays Manhilo and Sto. Rosario while maintaining its active coastal law enforcement efforts.

The Danajon Bank project of the Coastal Conservation and Education Foundation, Inc. (CCEF), funded by the U.S. Agency for International Development (USAID), gained another supporter in Congressman Roger “Oging” Mercado of Southern Leyte as he vowed to continue in assisting the City of Maasin in its drive to protect the marine resources. He is thankful for CCEF’s info drive in letting the public know of this very diverse ecosystem and is hoping that it will trigger interest from the public for a collective action not only in the City of Maasin but in other areas covering the Danajon Bank.

There is still a long way to go but winning the support of stakeholders and engaging the inter-local government units are crucial steps to realize this dream to protect and preserve the ONLY double barrier reef in the Philippines, and among the mere six in the world

CCEF Partners with Argao to Keep the Coasts Clear

Research feedback is a good practice for effective CRM