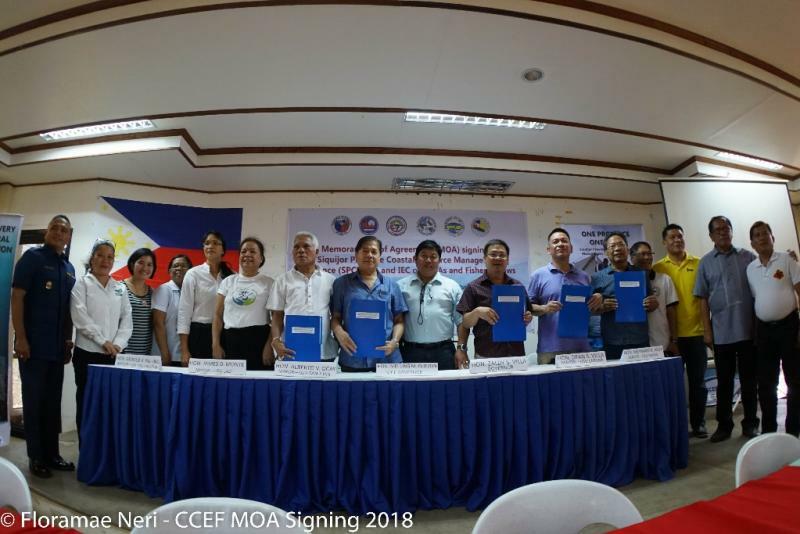 Siquijor Province Coastal Resource Management Alliance (SPCRMA) Memorandum of Agreement was officially signed on August 13, 2018. After more than a year of consultative meetings and lobbying for the cooperation of each participating Municipality, the Siquijor Province has finally formalized the agreement of mayors of 5 out 6 municipalities, namely, Enrique Villanueva, Maria, Larena, Lazi, and San Juan. The SPCRMA MOA signing were also attended by supporting national and local agencies (e.g., Bureau of Fisheries and Aquatic Resources, Department of Environment and Natural Resources, Philippine National Police, Philippine Coast Guard, Philippine Navy, Siquijor State College and others).

In 2017, the Provincial Government of Siquijor initiated the formation of a “One Province, One Team” Provincial Bantay Dagat Task Force to mitigate illegal fishing, which was led by the Office of the Governor and its Provincial Council. This initiative was supported by the Unico Conservation Foundation (UCF) through CCEF’s SUSTAIN Project (Strengthening and Up-scaling through trainings, Alliance building, Institutionalization and Networking) of MPAs in Siquijor Province.

Project SUSTAIN was followed through with CCEF’s Project ISDA (Isda Siguruon Damgong makab-ot pinaagi sa Alyansa), with support from both the Foundation for the Philippines Environment (FPE) and UCF. One of Project ISDA’s objective is in strengthening Siquijor’s MPA and coastal law enforcement initiatives throughout the province through alliance building.

The formation of an inter-LGU Alliance, which is also a network of MPAs called Siquijor Province Coastal Resource Management Alliance (or SPCRMA), which was carried out in 2017 and this year culminated in the MOA Signing. Several meetings of the technical working group (TWG) were made to propel the alliance formation. The TWG was composed of the Office of the Provincial Agriculturist – CRM staff with participation from the Provincial Agriculturist (L. Caroro) in some activities, selected members of the Sangguniang Panlalawigan (SP) and the Project ISDA CCEF team.

SPCRMA is chaired by the Governor the Vice Governor takes the lead in the absence of the Governor. The members of the Alliance are the municipalities of Siquijor Province headed by each Local Chief Executive. In the absence of the Mayor, the Municipal Agriculturist (MA) or Municipal Agriculture Officer (MAO) takes the lead. The MPAs are the CRM units of each LGU.

Information used in this article is based on Dr. Aileen Maypa’s report submitted to CCEF as part of the Project ISDA. Dr Maypa is the Principal investigator of Project ISDA funded by FPE and UCF in collaboration with the LGU.

Signing of the Memorandum of Agreement for the Southeast Cebu Coastal Resource Management Council (Argao, Dalaguete,Alcoy, Oslob,Santander and Samboan)