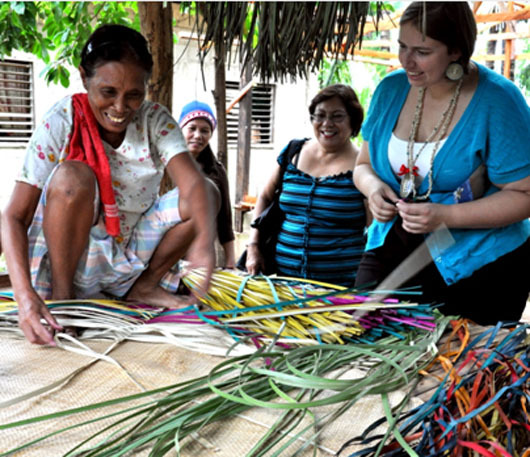 USAID representative witnessing how a mat is made.

In the recent visit of the United States Agency for International Development (USAID) to the communities of the Danajon Bank Double Barrier Reef, Joseph Foltz, Deputy Chief, Office of Environment, Energy and Climate Changes and party met with the members of the Bien Unido Weaver’s Association (BUWAS) in Bohol. The weaver’s organization is supported by CCEF-Danajon Bank Project’s component on increasing economic opportunities through sustainable livelihoods. The women weavers showcased their products to the groups, as well as the step-by-step procedure on how mats were made out of locally sourced “Romblon” leaves. Their products which include floor mats of various sizes, multi-purpose bags, place mats, wine holders, hats, among others were displayed in their souvenir shop at Bohol Yacht Club, Bien Unido, Bohol.

During their two-day visit last July 26 – 27, the group together with CCEF Executive Director Atty. Rose-Liza Eisma-Osorio and Danajon Bank Project Manager, Rizaller Amolo also snorkelled at the Bilangan Bilangan East Marine Sanctuary; visited and interacted with the community seaweed growers in Hingotanan Island; visited the Talibon Coastal Resources Management Interpretive Center and met briefly with provincial and municipal partners of Bohol. The visit is part of the agency’s regular assessment of their social development assistance in different project areas. To recall, USAID has been providing financial support to several successful coastal and fisheries management interventions in Danajon Bank and Bohol in general. These include previous initiatives like Local Governance and Democracy (GOLD) Project, Coastal Resources Management Project (CRMP), and Fisheries for Improved and Sustainable Harvest (FISH) Project. Meanwhile, USAID also announced the newly approved five-year project that will be implemented in Danajon Bank along with other 8 key marine biodiversity areas in the country, the Ecosystem Improved for Sustainable Fisheries (EcoFISH).

When asked about the his view on how a unique ecosystem like Danajon Bank should be managed, Mayor Niño Rey Boniel of Bien Unido said: “It is important to recognize individual municipal initiatives to impact the management of a larger ecosystem.” The Mayor also presented some of their strategies within Bien Unido as its contribution to the over-all management of Danajon Bank.

During the entire visit, the group took cognizance of the breadth of Danajon Bank and the resources that coastal residents are mostly dependent on. They were able to witness on-going initiatives for the protection and management of Danajon Bank. Likewise, the communities was also able to share their contribution to protect the reefs around Danajon Bank and to show their appreciation for the support given to them in their endeavours.

Sumilon Island and Olang Marine Sanctuary make it to the Top 5 finalists in the 2021 Para El Mar MPA Awards!