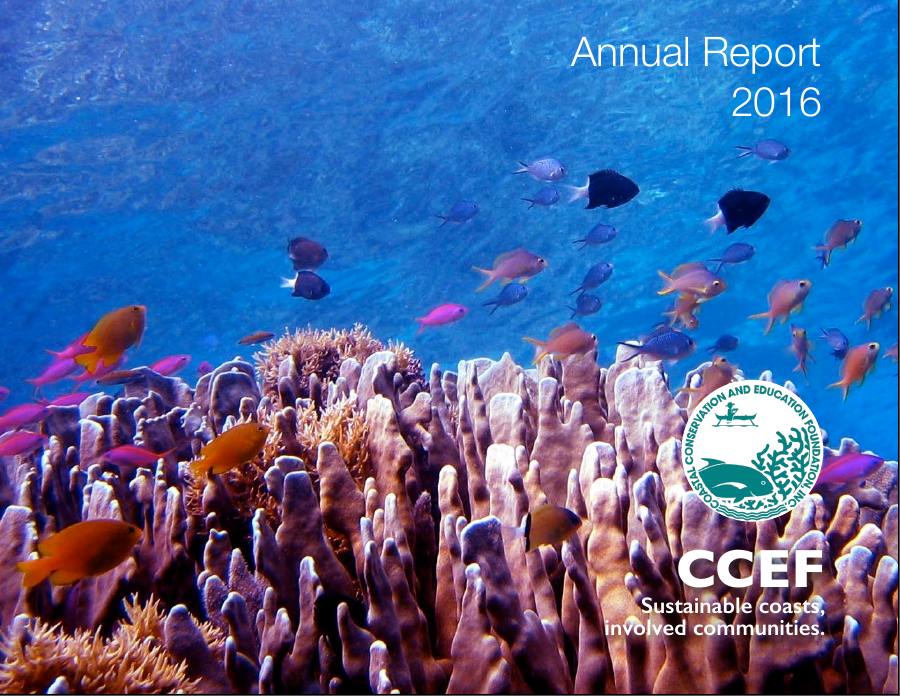 Damsel fishes bask in the morning sun above the reef inside the sanctuary at Sumilon Island. Photo: Agnes Sabonsolin

The year 2016 marked the success for several projects under CCEF. GIZ-PAME, a program started in 2014, recently reached its completion, benefiting coastal barangays in the province of Siquijor. Steadfast support from UNICO Conservation Foundation has contributed to the commencement of the “Ecosystems Monitoring and Evaluation Project in Selected Sites in Siquijor and Cebu Provinces”. Data gathered from this program will be used towards advocating conservation and rehabilitation of these areas. The 2016 Saving Philippine Reefs Expedition (SPR) was participated by volunteers from the United Kingdom, United States, Australia and the Philippines. The Calamianes Group of Islands, comprised by the municipalities of Coron, Culion and Busuanga in the province of Palawan, were visited by the group. Despite being struck by typhoons, the coral reefs in these areas continue to be in good condition.

Special projects were launched including a coastal clean-up activity in partnership with Fluor Daniel Inc. – Philippines and a mangrove rehabilitation monitoring event together with Globe Telecom.

CCEF has renewed its membership to Kaabag sa Sugbo, Central Visayas Network and has attained vice-chairmanship in the Commission on Institutional Capacity Building (CICB) of CoDe-NGO (Caucus of Development NGO of the Philippines).

In its efforts to capacitate constituents and stakeholders and improve database systems, CCEF continues to work towards the conservation of marine environments with the help of local government and communities. There is much to look forward to in the coming year as the organization heads for strengthening relationships for a resilient future.

Badian Bay and its threatened resources