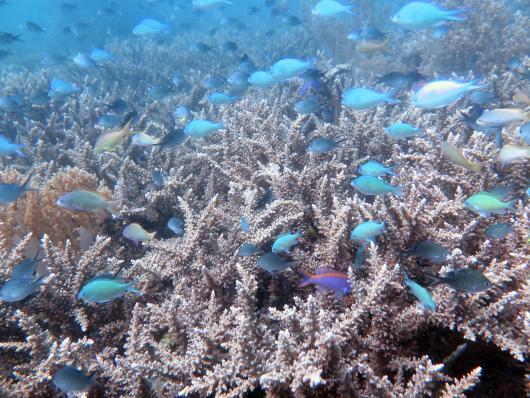 A healthy coral reef in the adjacent northern reef of Nonoc Marine Sanctuary in 2016. Photo by M.Baird

Coral reefs are home to tens of thousands of fish and marine organisms that we depend on for food, livelihood and employment. However, to date, coral reefs are threatened from both the negative impacts of climate change and human disturbance. Sharp declines in the abundance and biomass of commercially important reef fish species (target species) were documented in MPAs situated in the eastern side of Siquijor Province with more than 90% coral damage, after typhoon Pablo (Maypa et al. 2013, Maypa et. al. 2014) .

As part of CCEF’s assistance to Siquijor Province in the agenda of marine protected area (MPA) sustainability, our technical team, together with the Provincial Monitoring Team (PROMOTE) of the Province, monitor the 21 coral reef MPAs at least annually. This year, while monitoring Nonoc Marine Sanctuary and its adjacent fished area under the jurisdiction of Larena Municipality, our team documented a 0.4 ha coral damage in the latter. Based on the CCEF MAPA Database, coral cover declined from excellent condition (70%) in 2008 to 2012 to poor condition (less than 25%) by 2016 and 2017 (Maypa et. al. 2017). Likely causes include anchor damage, barge docking manoeuvrers and maybe pier construction, based on the damage patterns observed, combined with some typhoon damage from 2012. A CCEF technical report on the status of Nonoc Marine Sanctuary was submitted to the Municipality of Larena, the Province of Siquijor and the office of the DENR- PENRO of the same Province. A copy was also sent to the OIC Director of DENR Regin 7 in Cebu City.

Further, the same report was presented in a committee hearing participated by the Baranagay Captain of Nonoc, the Chairperson for Agriculture and Fisheries and other Sanguniang Bayan Councilors of Larena. Another meeting was made with the Barangay Captain of Nonoc presiding at the Branagay Hall of Nonoc on September 4, 2017 where the same presentation was shown with owner of the barge and pier that allegedly caused some of the coral damage documented. Potential solutions to mitigate the coral damage were explored in this meeting with the assistance of the CRM Section under the Office of the Provincial Agriculturist of the Province and CCEF. To date CCEF has not received any response from DENR-PENRO Office in Siquijor Province on this matter. Nonoc Marine Sanctuary and its adjacent reefs have high ecotourism if managed well.

28 sacks of plastic and 53 Crown of Thorns collected in Looc, Oslob Cebu