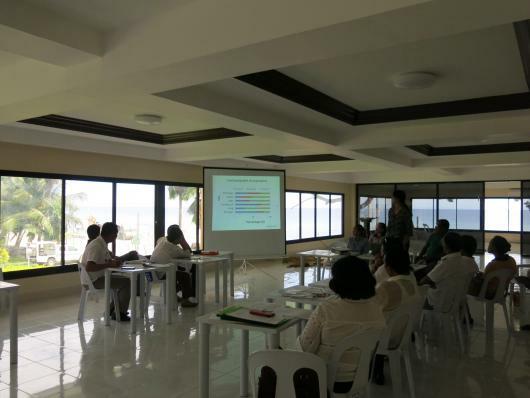 As CCEF scales up with its coastal resource management initiatives in Siquijor Province, the capacity of local government partners including the Province, are also expected to increase. We are currently implementing Project SUSTAIN (Strengthening and up-scaling through trainings, alliance building, institutionalization and networking of MPAs) in Siquijor Province through the support of UNICO Conservation Foundation in Australia. One major of objective of this project is to build a MPA alliance through inter-LGU collaborations so as to sustain MPA enforcement and coastal law enforcement of the Province in order to secure its fish stocks.

To recall, two sequential strong typhoons hit Siquijor Island in the years 2011 (Sendong) and 2012 (Bopha). This decimated the coral reefs in the eastern side of Siquijor Province which included the municipalities of Maria and Enrique Villanueva. A need to develop community – and LGU – friendly coral reef rehabilitation protocols was established. CCEF carried out a large scale coral reef recovery research along with the development of a coral reef rehabilitation protocol for typhoon-damaged areas supported by GIZ-ACCCoast, UNICO Conservation Foundation through CCEF and the Foundation for the Philippine Environment (FPE) through Silliman University – Institute of Environmental and Marine Sciences (SUIEMS) in partnership with Siquijor Province. In this project we noted that no coral reef recovery can take place after such a large scale and severe devastation without strict MPA enforcement and protection. We fed back this message to our LGU partners in Siquijor Province supported by our years of research data. They listened. They acted. Thus, the formation of the “One Province, One Team” was initiated at the provincial level, assisted by CCEF-SUSTAIN. Effort to finalize the inter-LGU arrangements of this alliance is on-going.

Recently, the CCEF – SUSTAIN Project team did some feedback to the Sangguniang Bayan Council (SB) of Enrique Villanueva and Maria Municipalities on the negative impacts of typhoon damage on the fisherfolk catch, results and lessons from the coral reef recovery research and coral reef rehabilitation, the status of the MPAs in both municipalities and our recommendations to improve its management. We also reminded them the importance of supporting the MPA alliance. Our information was well received and appreciated at the SB level.

Google defines feedback as “information about reactions to a product, a person’s performance of a task, etc., used as a basis for improvement” or “he modification or control of a process or system by its results or effects, e.g., in a biochemical pathway or behavior response.” In the CCEF CRM practice, research is our base. We feedback our science-based simplified information to the local communities, MPA management bodies and the local legislative bodies. In our experience, by following this conventional practice, a well – informed legislative body can produce resolutions and policies that can match the trajectories of and recommendations resulting from science. This process however, comes with perseverance, dedication and challenges.