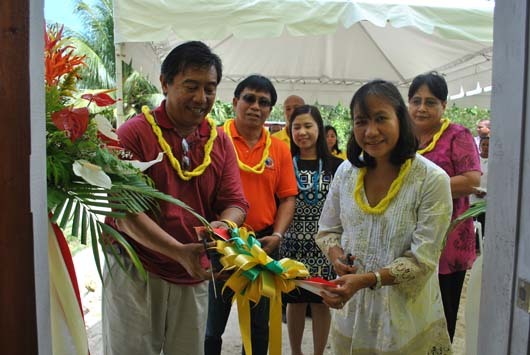 On October 22, 2012 at Larena, Siquijor, the Provincial Coastal Resource Management (CRM) Learning Center was inaugurated. The event began with a blessing ceremony followed by ribbon-cutting by Governor Orlando A. Fua, Jr. and Mrs. Evangeline White, Board Secretary and co-founder of the Coastal Conservation and Education Foundation, Inc. (CCEF).

The construction of the Provincial CRM Learning Center has been a year-long endeavor of the Provincial government of Siquijor, CCEF, and the Deutsche Gesellscaft für Internationale Zusammenarbeit (GIZ). Under the project entitled: Consolidating MPA Network Planning for Resilience in Siquijor, it is a goal of the implementing partners for the building to serve as a center for bringing together ideas, experiences, and stories to share, strengthen, and sustain the marine and coastal conservation efforts of the island of Siquijor.

The learning center was built in Larena, next to the Bureau of Fisheries and Aquatic Resources Office, on donated land from the province. Other honored guests at the inauguration of the building were Mayor Rebecca Padayhag of the Municipality of Maria, Mayor Melojean Orquillas of the Municipality of Enrique Villanueva, and Siquijor Provincial Board Member Hon. Arthur M. Chan.

Siquijor has been a partner of CCEF since 2002 when coastal resource management efforts were introduced to the island. Since then, the only way has been up for all the leaders of the six municipalities with the active support of their provincial government. To date, key accomplishments in the province have been to come up with the Siquijor Environmental Code and to address priority issues, such as destructive and commercial fishing, in the the area.

In a heartfelt speech, Governor Fua reminded his fellow Siquijodnons that CRM efforts have only been increasing in momentum. To date, blast fishing has gone down to zero and there have been no reported cases of illegal fishing in the waters surrounding the island.

Mrs. Evangeline White said that CCEF and Dr. Alan White were very proud to work with the leaders of Siquijor in bringing marine conservation issues to the forefront. She relayed the important message that Siquijor has been one of the strongest supporters of marine management as well as being the first island in the Philippines to create and implement a marine protected area network.

Mrs. White expressed gratitude for the people on the island of Siquijor in their exceptional CRM efforts. She said that it was with great pride and hope to see even more accomplishments in the future of Siquijor, especially in breakthroughs for environmental protection.

The Sad State of Casay and Tulic Reef in Argao, Cebu