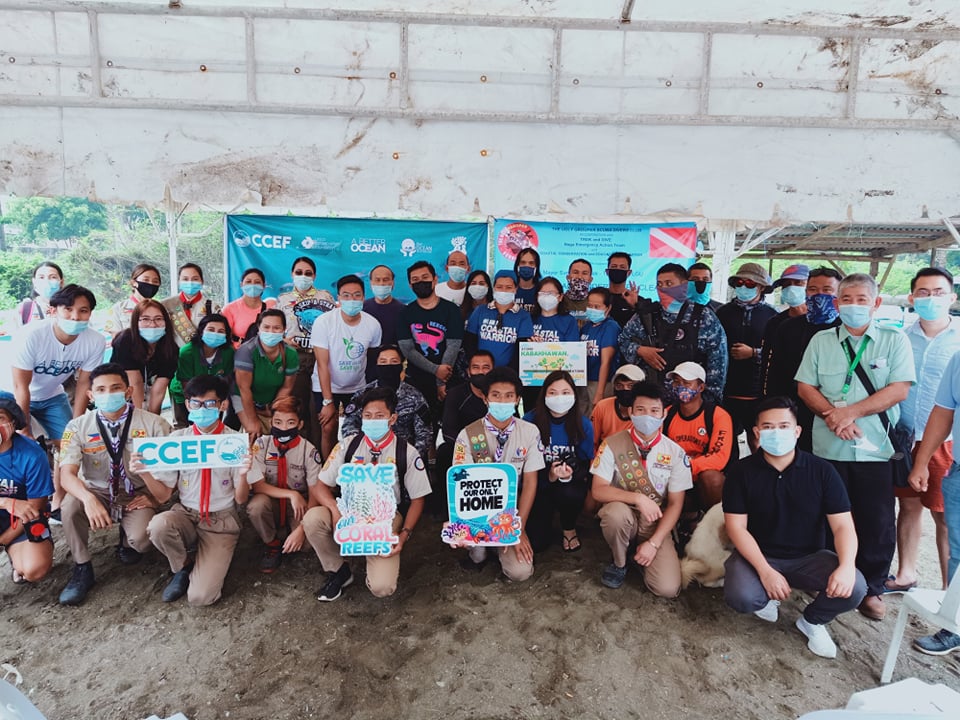 NOVEMBER 7, 2020— More than 40 participants from Talisay City joined the underwater and coastal cleanup at Lagundi, Makatol Reef and Barangay, Biasong mangrove area. The cleanup team composed of 11 divers and 15 coastal cleanup volunteers were able collect 13 sacks of trash mostly composed of plastic sachets, plastic bags, torn fish net and nylon lines, in addition to 1 sack of crown of thorns collected by divers, which is locally known as “sanay” or “salanay”.

The Lagundi Reef in Talisay City used to be a famous dive spot because of its accessibility from urban areas and rich biodiversity. The 2.4-hectare reef boasts not only of beautiful Gorgonian Fan corals but also of different common flagship species such as sea turtles and barracuda. In the past,  Lagundi reef was refered to be what scientists call a “resilient reef”, as the coral reefs in the area continue to thrive despite receiving an influx of sediments and waste from Mananga River.

But as years pass, several threats have come to Lagundi Reef, degrading the reef to its condition today. Blast fishing became rampant in Talisay City municipal waters and was even coined as the “Dynamite Capital of the Philippines”.

Based on the observations on the coral reef condition during the underwater cleanup, it was evident that the reef is threatened by several sources such as illegal fishing (presence of fishing line and net entanglements in the MPA), possible bleaching effects of increasing ocean temperatures, siltation/sedimentation, and crown-of-thorns infestation. The divers were also able to collect other traces of illegal fishing in the area including an unexploded, improvised fish bomb/dynamite.

According to the Philippine Coast Guard, MPA regulations and boundaries are not being properly enforced and that the previous missing buoy markers which were used to mark the MPA boundaries are being cut-off by local fishermen. Jonathaniel Apurado, CCEF Marine Biologist, also added that the lack of enforcement could be the main problem of the MPAs in Talisay and that its MPA management body should be revived. Supporting relevant ordinances should also be revisited as starting points in improving the management of the MPA.

The mangroves in Barangay Biasong is a key ecosystem that protects the reefs in Talisay. Garbage and siltation from upstream areas are being hold off by the long stretch of Avicennia (miapi/bungalon)species of mangrove in Barangay Biasong and Barangay Dumlog. The Barangay Biasong mangrove area has been a year-long project site of CCEF project SMILE. Continuing the efforts of the past year, 15 volunteers from the Boy Scouts of the Philippines collected 228 kilos of garbage from the mangrove area by the mouth of the Mananga river in Barangay Biasong, Talisay. It was also noted during the cleanup that both natural growth and planted mangrove seedlings in the area are now able to survive, it is a great improvement compared to the results of the past mangrove habitat survey which only documented a 1% regeneration rate because of the flooding and entanglements of garbage in the mangrove area.

Based on what we have seen underwater, Lagundi reef still has a great potential to recover. There are still some patches of coral growth and the visibility is still clear in deeper areas. The first thing that I would recommend for the LGU is to place clear boundaries for the MPA so that people are made aware as to where fishing is not allowed. They should also expand the MPA since there are some areas that does not match the actual coordinates. Also, use bouy markers that are difficult to cut to mark the MPA so illegal fishers would not be able to cut them . In Mananga, we should plant more mangroves because they are key ecosystems in preventing siltation from going to the reef. We can’t only protect the coral reefs and forget to conserve the mangroves as this will just render all the efforts to become useless. These two activities should be done together as they complement one another.

Two of the Four MPAs which were visited during the activity are reportedly disturbed and are at risk from total devastation. At the end of the activity, CCEF gave insights and recommendations on the state of Lagundi and Makatol Reef. Talisay City Mayor “Samsam” Gullas also made his insights regarding the cleanup activity and promised to look into the lack of enforcement in the area specially the fish sanctuaries. He also said that because he first envisioned Talisay to become a tourist spot in Cebu, he recognizes the importance of environmental protection and will prioritize placing buoy markers for the MPAs (all 4 proclaimed fish sanctuaries) to revive and strengthen enforcement.

Overall, the Marine Protected areas in Talisay needs better enforcement and protection. I recommend to use MPA bouy markers that are to be anchored properly, burrowed under the sand or mud, with chainlink attachments similar to navigational bouys as a reference and which are deterrent to sabotages of alledged cutting. These serves to mark the MPAs and gives no reason for illegal fishers to encroach. In Mananga river system, we are obligated to protect the remaining mangroves and responsibly or properly plant more mangrove to reclaim the lost parts of the coastal ecosystem due to human infrastracture developments, its benifit in preventing siltation from going to the reef is a key function that no human engineering works can replicate.

In summary, Mr. Jonathaniel Apurado and the rest of the cleanup team recommended the following:

1) Reconvene the management body and the tackling the ordinances with possible amendments of all Talisay’s marine protected areas.

3) Involve the effort of putting up a city facility for Sewage Treatment Plant to improve water quality and minimize if not polluting or fertilizing the nearby waters where coral reefs and users (people who utilize and use the sea) often go (e.g Talisay beachgoers for weekend swims/picnic).

4) Solid waste management goes hand in hand with wastewater management and the associated city planning/zoning of housing, industries, tourism, law enforcement, and other relevant departments that promote and protects natural resources not just the coastal areas but the upland areas as well. A review on Land Use and Forest Plan would definitely be in hand along with Business Plan that a city may envision and invest in tourism.

5) Mananga river as a major tributary towards the reefs is in need to be rehabilitated also by keeping the mangrove forest intact and river waters and its sand, embankments well away from destructive exploitations, by keeping the integrity of the river ecology means clean and abundant water for the city’s needs is sustained. The multi-sectoral effort of the city’s community suggested by the mayor would very well be working with a focus and determined leadership along with each member’s participation.