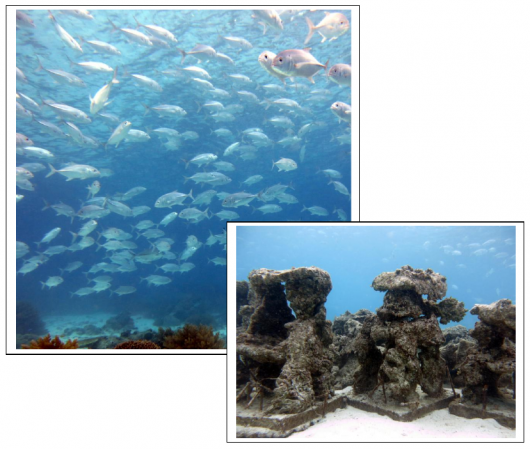 To continue our efforts in coral and reef fish recovery in Apo Island Marine Sanctuary, a monitoring was made by a team of Silliman University Institute of Environmental and Marine Sciences (SU-IEMS) – Coastal Conservation and Education Foundation (CCEF) and Department of Environment and Natural Resources – Apo Island Landscape and Protected Seascape (DENR-AIPLS) marine biologists in November 13 – 14, 2016. Using fish visual census, it was estimated that 500 big-eye trevallies or jacks (Caranx sexfasciatus), locally known as “baulo” were utilizing the fish habitats as part of their home range.To recall, 30 fish habitat modules were deployed in April and May 2016 as part of the reef fish recovery efforts of the SU-IEMS – FPE (Foundation for the Philippine Environment), “Coral Reef Recovery in Typhoon-Damaged Reefs Project.” This project was implemented in response to the severe coral reef damage that resulted in Apo and Siquijor Islands after typhoons Sendong (2011) and Pablo (2012). It was documented that coral damage was more than 99% and reef fish densities and biomass declined five-fold based on a 2008 baseline. AIPLS – DENR, CCEF and UNICO Conservation Foundation (UCF) were also partners in this project. Currently our coral reef recovery monitoring is being sustained and supported by DENR-AIPLS.

CSOs Pledge to Be Part of the Talisay City Development Council