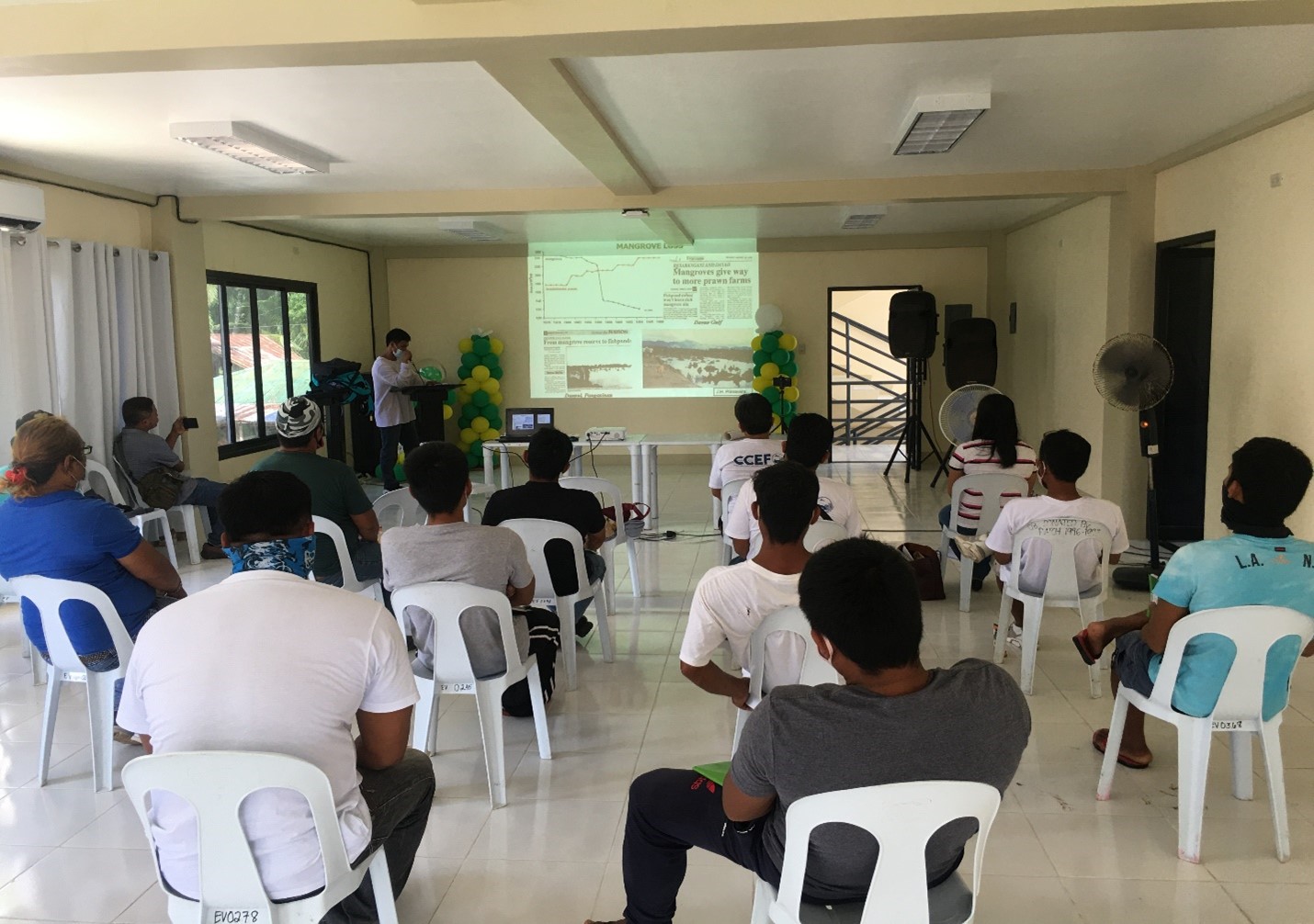 Marine Protected Areas (MPAs) are important fisheries management tools which is essential in achieving food security and conservation of fisheries, especially in island communities. In order to help sustain the efforts of different stakeholders in conserving an MPA, CCEF, in partnership with the Siquijor Province Coastal Resource Management Alliance (SPCRMA), conducted a 2-day training for MPA managers from Lazi and Enrique Villanueva (Binoongan, Olang, Tulapos) to scale-up the knowledge and skills of the managers in the long-term protection of the MPAs.

On the first day of the training, the participants listen to lectures on the basic concept of Marine Protected Areas, Coastal Law enforcement and the initiatives of the Siquijor Province COastal Resource Management Alliance. SPCRMA members Jaymar Vicoy and Rey S. Tabilon discussed the introduction to Coastal Resource Management and explained the importance of municipal-level management to help address the problem of declining fish stocks in the Philippines.

CCEF Project SEAled Coordinator, Reaan Catitig explained the concept of Marine Protected Areas and emphasized the need for strong enforcement and how government efforts has significantly improved its support for MPAs, because of the increasing number of MPAs established in Region 7.

Rollie Jun Romano, SPCRMA member then proceeded to his talk on the use of the Fisheries Law Enforcement Manual of Operations (FLEMOP), which is now adopted by the SPCRMA as basis and guide for its law enforcement activities. Romano also emphasized the importance of the documents that are needed for attachments and the proper way of documenting on all fishing paraphernalia’s, fishes caught and person caught in illegal fishing.

Rogelio Bayron, SPCRMA member then proceeded also with his talk on the common laws, violations and fines and the different types of violation which may vary between municipalities. Warren Inao, BFAR PFO then an orientation on the salient points of the Philippines Fisheries code or the Republic Act 8550.

The second day of the workshop focused more on the workshop and plotting exercises. Reaan Catitig explained the importance of the Global positioning system (GPS), and how GPS are used in enforcement, relationship of GPS with the chart and other GPS units that are currently available. He presented different types of GPS gadgets and how to operate or used certain units. Emphasized the map datum, different GPS pages and the used of android or smartphones in getting GPS coordinates, how to extract such coordinates and how it will be plotted to a common GPS tools like Google earth, also how to used map and the different markings and grid lines in relation to seaborne operations or in the MPA. After the presentation participants were divided into four groups, Group 1 Province and Lazi Fisheries Technician, Group 2 Tulapos CLE Team composed of PO, Group 3 Olang CLE Team composed of PO and Councils and last Group 4 Bino-ongan PO and Council with their Fisheries Technician. All Groups was handed by GPS units and each member were given a chance to used and operate such gadgets and guided by Mr. Rogelio Bayron and Mr. Reaan Catitig and they were taught the basic operations and downloaded GPS apps in their owned smartphones.

Mr. Reaan Catitig and Mr.Rogelio B. Bayron as the Resource Speakers took the lead of each individual teams how to plot with the used of Map, each teams performed the actual operations of GPS and extracted the coordinates and later own GPS coordinates were plotted using Map and second with the use of Go

Government Agencies gathers insights from CSOs to improve its Programs