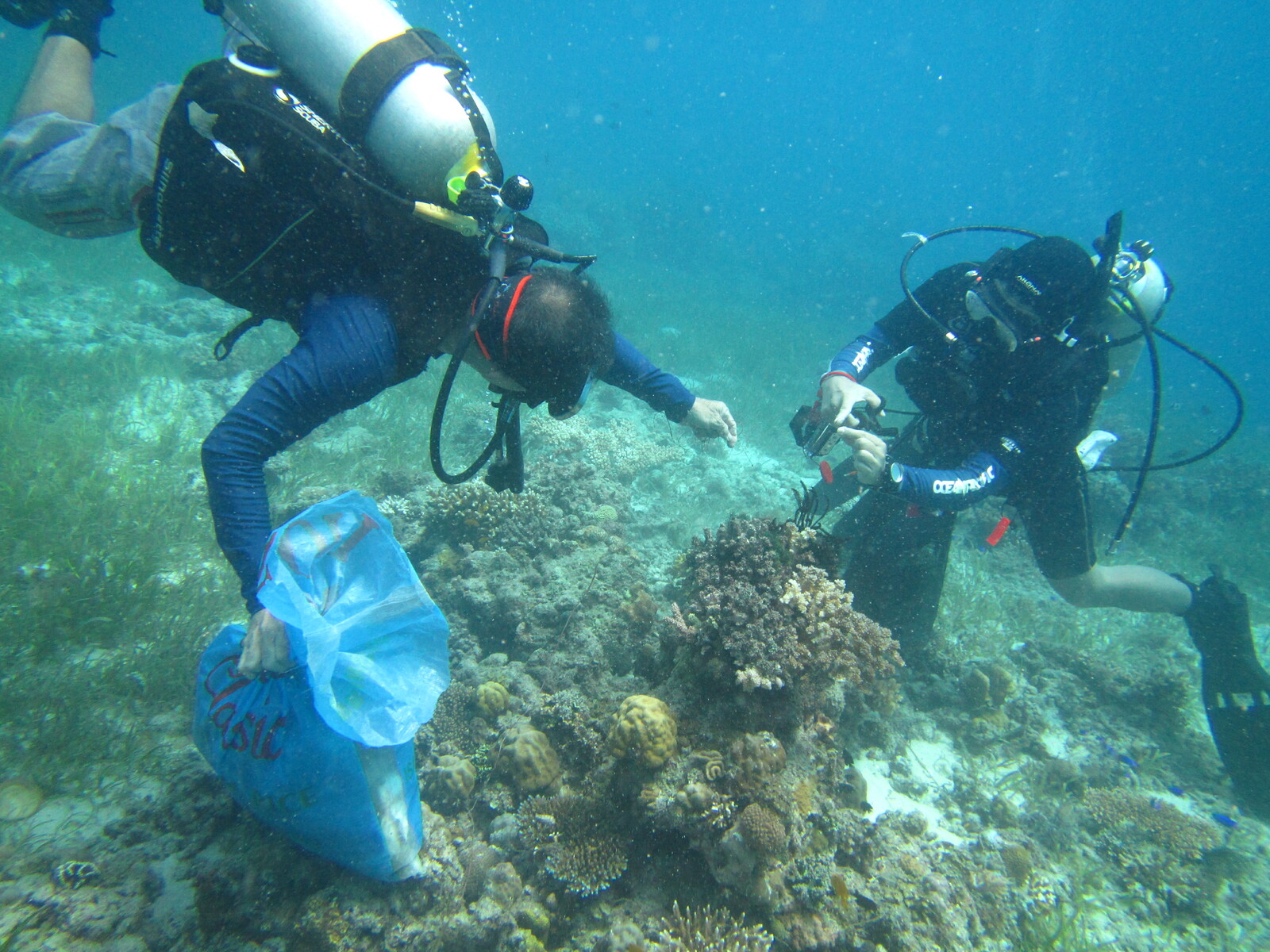 Continuing the efforts from the previous months, the CCEF team and its partner divers raised its cleanup efforts in the municipalities of Oslob, Argao and Dalaguete. The 2-day cleanup event was first in Mainit Wharf Oslob, and proceeded to Casay Dalaguete, and lastly in Poblacion, Argao.

Located at Barangay Mainit, the port is a two-way travel destination from Dapitan to Oslob. The Port is built mostly on sand, patches of corals and a rich seagrass bed. Because it is located close to the road, it can be expected that the area can hold a lot of trash and other items that might be related to port operations.

Several types of trash was found close to the port such as plastic wrappers, bottles, monofilament fishing nets and lines, shoes, diapers, rubber tires, nylon ropes that were scattered and entanglements around the seagrass and some of the corals.

The divers used a pair of scissors to carefully remove the nylon lines and ropes to avoid breakage of the corals. However, it was also observed during the dive that some big coral heads were torn apart which might be from big anchors or other similar equipment commonly used at the wharf. Moreover, scattered remains of wood, metal and possibly PVC pilings including stone rubbles from the construction of the wharf are also evident which is a hazard not only to the marine life but to divers as well.

Barangay Casay Dalaguete holds a beautiful and vast reef area, mostly comprised of fire corals. Although the water was murky, different types of corals were observed to thrive in the area but they were entangled with monofilament fishing lines.

Despite the abundance of corals, only few fish were observed. The turbid waters in Barangay Casay can also possibly be caused by the nearby quarry in Alcoy which adds to the sediments that naturally runoff from the nearby river.

According to locals, Poblacion Marine Sanctuary is one of the most well-enforced MPAs in Argao. Enforcement and buoy markers can be easily spotted in the area, and coastal law enforcers were present during the dive. Although water visibility in the MPA is poor because it is located close to a river, the different types coral reefs continue to thrive in the MPA including large table corals with a variety of small fishes.

Just like other MPAs in the previous underwater cleanups, several discarded fishing gears such as fishing lines and hooks were retrieved in the MPA, indicating that illegal fishing is still present in the area. Algae and other invertebrates have grown on the entangled lines and can block sunlight needed for the coral’s nourishment and growth.

1) Put up signages of Anti-littering ordinances at strategic places all over the barangay’s meeting places including heavy traffic areas like the wharf to show that waste management law is serious and whoever violates them will have a free meal inside a prison bar.

2) the beach, seagrass and reef area near the wharf is suitable for recreation like swimming, snorkeling or picnicking but like any other beaches, enforcement of waste management laws are paramount and wanting to keep the impacts as minimal as possible if it goes with infrastructure development.

3.) Proper containment and disposal of liquid waste that ships, boats and the wharf facility itself must have.

3) Eco-Friendly structure design and planning for all the dive sites. The design of the wharf has destroyed the corals/seagrass that is beneath it now, CCEF recommends a eco-friendly design and careful planning of any infrastructure in coastal areas.

4.) Strengthen law enforcement in Dalaguete and Argao as fishing gears are still present within the MPA, indicating that illegal fishing is still in the MPA and making the efforts in conserving the MPA futile.

Research feedback is a good practice for effective CRM

Empowering the Youth for Sustainable Tourism