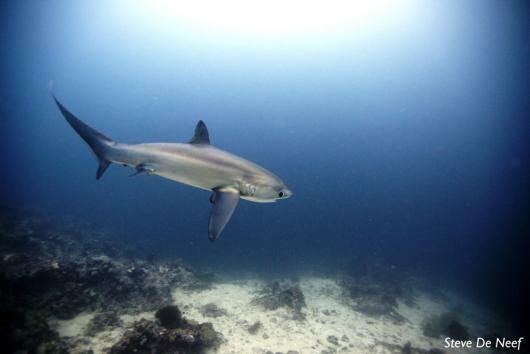 Silky sharks Carcharhinus faciformis, Thresher sharks Alopias spp., Devil rays Mobula spp., and the Chambered Nautilus of the Family Nautilidae are among the marine species which made it to CITES Appendix II list at the 17th Conference of Parties to the Convention on International Trade in Endangered Species of Wild Fauna and Flora (CITES CoP17).

The Philippine government is one of the many countries which supported the listing of these marine species to promote and improve on the conservation and management of globally traded marine resources.  At a national stakeholders consultation organized by the Department of Environment and Natural Resource (DENR) Biodiversity Management Bureau (BMB)  CITES) Management Authority with the Department of Foreign Affairs (DFA), the Philippines drafted country positions on about 140 agenda items for CITES CoP17, including for proposals that would place international trade in specimens of about 450 species under CITES regulatory controls or under higher level of protection as well as 18 draft interventions/statements for selected issues/concerns (directly relevant to PH). As Ms. CITES Philippines Management Authority Ms. Josefina De Leon highlighted:  “Position does matter!”

CCEF  through its ED Moonyeen Alava,   a marine biologist and also a Philippine shark specialist,  participated in the stakeholder consultation process and provided expert’s opinion on the various marine agenda and species proposals as well as co-facilitated the Philippine pre-CoP 17 consultation workshop  in Tagaytay, Cavite, Philippines on  6-9 September 2016.

CITES (www.cites.org) is an international agreement between governments aimed at ensuring that international trade in specimens of wild animals and plants does not threaten their survival. CoP17 which met in Johannesburg, South Africa in 24 September to 5 October 2016 was attended by more than 3,500 participants representing 158 governments, international organizations, non-governmental organizations and media. Some of the resolutions and decisions adopted concern include actions to combat wildlife trafficking; demand reduction strategies to combat illegal trade in CITES-listed species.