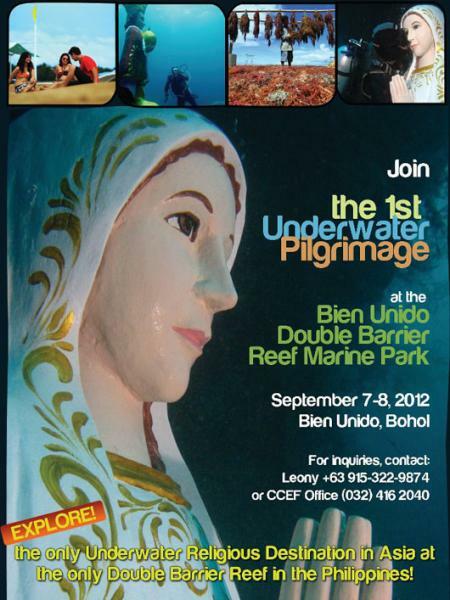 September 13, 2012 –Submerged beneath the seas off Bien Unido, Bohol are two statues of religious significance to a lot of Filipinos. Situated 80 feet underwater is the image of the Blessed Virgin Mary or Mama Mary as how she is fondly known. Located almost two kilometers away and at a more accessible depth of 30 feet is found the statue of the Santo Niño. These statues were lowered two years ago this date. To celebrate the birthday of Mama Mary on September 8, the Municipality of Bien Unido, together with CCEF, USAID, the SeaKnights, and MSBOAT held an event for divers and those with an itch for adventure. Called the First Underwater Pilgrimage, the activity was announced in CCEF’s website, and linked via Facebook and Twitter. More than 100 persons signified their intent to participate. However, when it was time to depart for Bien Unido, a smaller group of about 50 noisy and enthusiastic divers filled up two large dive boats as they made their way from the Hilton Wharf in Punta Engano, Mactan Island to Bohol Yacht Club. Bohol Yacht Club, found in the poblacion of Bien Unido, is a modern facility that serves as the jump off point for divers who wish to explore the vast expanse of Danajon Double Barrier Reef. 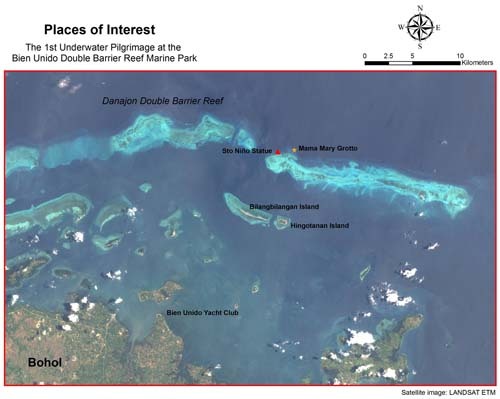 At around ten in the morning, the dive boats arrived at the yacht club. Welcomed by Mayor Niño Boniel, the participants made their way to the Municipal Hall of Bien Unido to hear Rev. Fr. Edgardo Deligero, the town’s parish priest, celebrate mass. After the mass, a fluvial parade consisting of 15 boats of varying sizes made their way to the spots where the statues were submerged. Fisherfolk from the neighboring island municipalities joined the parade. It was a touching moment for everyone when flowers and prayers were offered to the sea. The crowd, on their boats, waved their hands as they sang Batobalani Sa Gugma (Magnet of Love) in honor of the Santo Nino. Afterwards, everyone cheered and clapped as they greeted Happy Birthday! to Mama Mary. It did not escape everyone’s notice that while it was still in the midst of the typhoon season, the sea that day was flat like glass. Divine intervention? Cebuanos and Boholanos have always known that it is not unheard of for Mama Mary and the Santo Niño to grant the wishes of those who sincerely pray for it.

Lunch followed and took place on board the boats. For those who are daring enough to sample what the sea can offer, fisherfolk offered wasay-wasay (hammer shells) and sea urchins to the many first time visitors of the area. For many, it was a pleasant surprise how good these seafood tasted. At around three in the afternoon, the participants went back to their respective places.

Back at the yacht club, a briefing for the following day’s dive was made. Emphasis was given on safety given the fact that descending to the statue of Mama Mary at 80 feet is already a deep dive. Afterwards, there were photo sessions. Speakers from the different organizations that were involved in the activity oriented the participants about their groups. Mayor Boniel talked about the founding of the Bien Unido Double Barrier Reef Marine Park and how the statues found their way into the depths of the reef. Dinner and socials followed.

The next day September 8 came as a bright and sun-shiny day and it started with a mass followed by breakfast. Four diveboats , filled with divers and their gear, made their way to the first dive site of the day – the statue of Mama Mary. This figure is situated below a overhang giving an impression that the statue is inside a grotto. At 14 feet tall, the statue of the Virgin Mary looms large, dwarfing any visitor that comes near. All divers were made to follow a descent line. Each was given enough time to explore the statue and the surroundings, say a private prayer (a laminated prayer sheet was given for everyone), and take pictures. A brightly colored ascent line was laid out to safely guide divers back to the surface. A conspicuous marker was laid out at 15 feet so that everyone will remember to do their safety stops.

The second dive site, at 30 feet deep, was the statue of the Child Jesus. While roughly the same size as the Virgin Mary’s, the Santo Niño was mounted on a massive pedestal. Due to the shallower depth, there were more hard corals, and the colors of fish and reef came out to the delight of everyone. Lunch was served onboard the dive boats and it was at around 3 pm when the boats made their way back to the yacht club. After the closing remarks, the divers took the same boats as they made their way back to Mactan, Cebu.

Jun Amolo, Danajon Bank Project Coordinator concluded that, “the gathering was an overwhelming success for the municipality, the involved organizations and in the bigger picture, the environment. The municipality was able to build stronger ties with the community as a means to pull everyone together towards environmental protection. The divers were able to experience an alternative dive destination that promotes eco-friendly tourism strategies. The collaborating organizations that actively involved themselves were able to share their different but unified advocacies such as CCEF’s passion for building Sustainable Coasts and Involved Communities”. The First Pilgrimage Dive set a high bar in terms of promoting awareness on the importance of Danajon Double Barrier Reef both as a resource and as a tourist destination. For everyone who did not make it to this year’s activity, the following year will surely bring another memorable adventure for everyone. 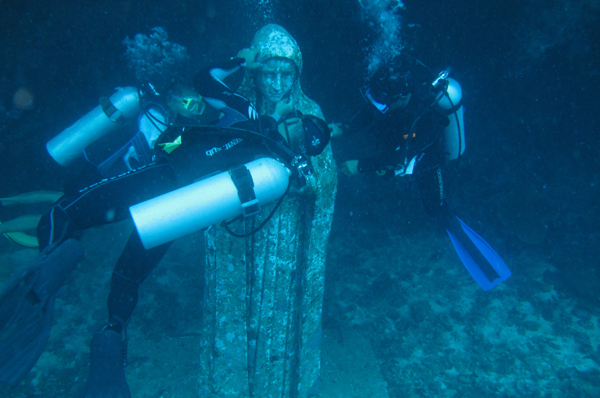 CCEF divers NipNip and Pedie, assisted by Alfie of SeaKnights, removing large marine growths from the statue of the Virgin Mary 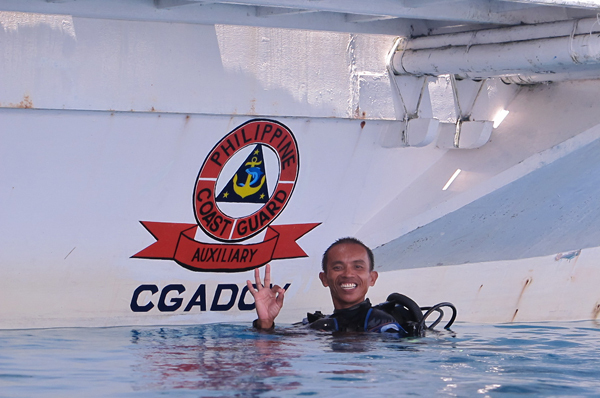 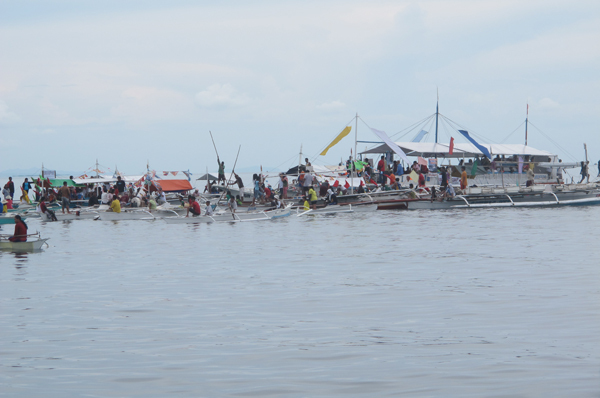 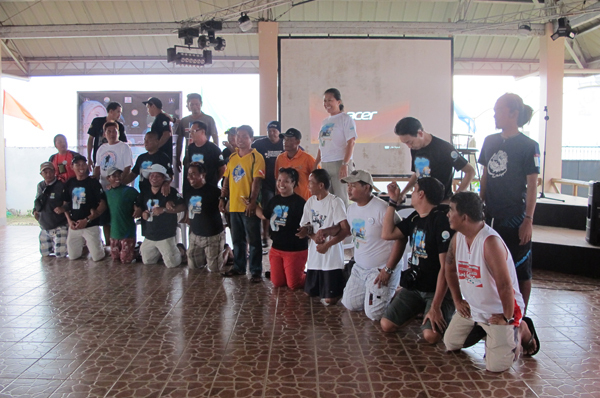 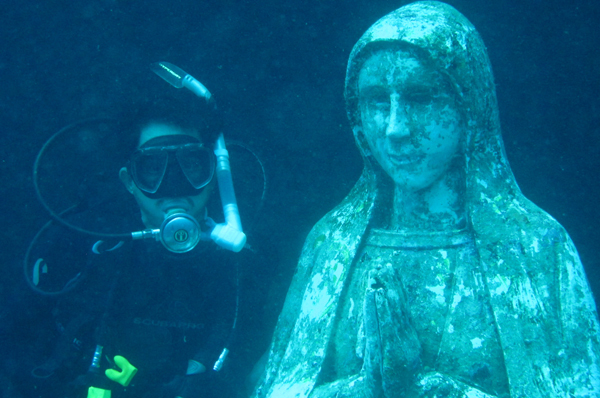 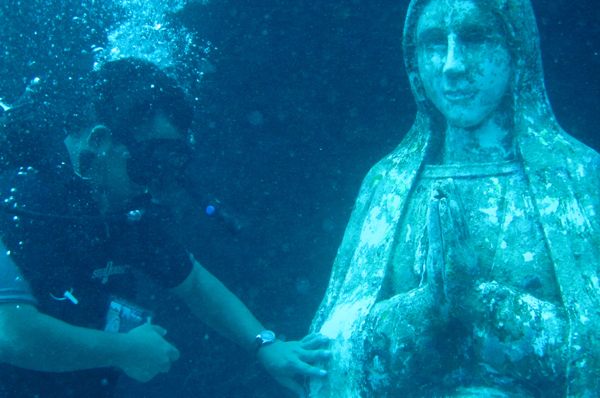 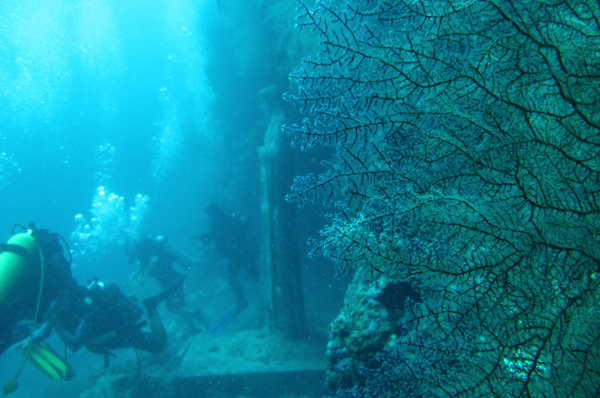 The underwater grotto of the Blessed Virgin Mary 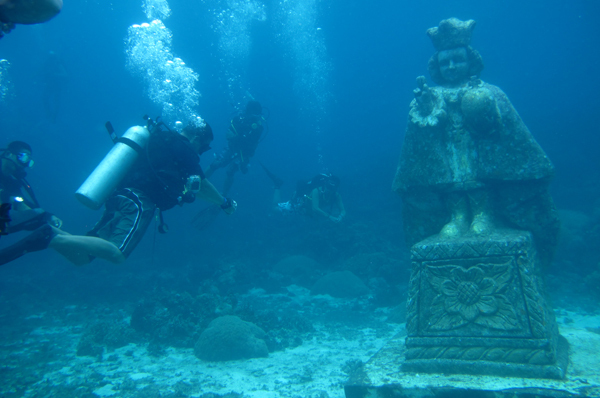 The statue of the Santo Niño in 30 feet of water. 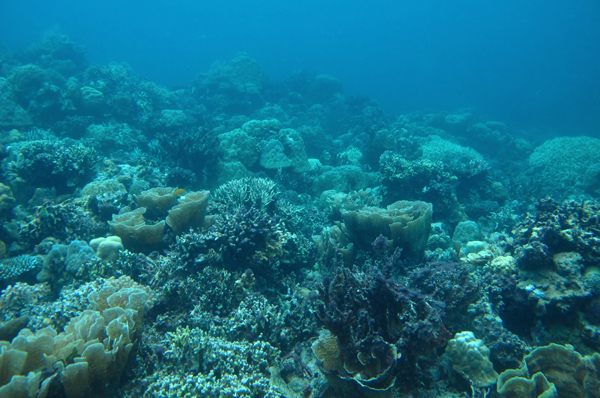 There are nice corals near the site of the Santo Niño shrine.